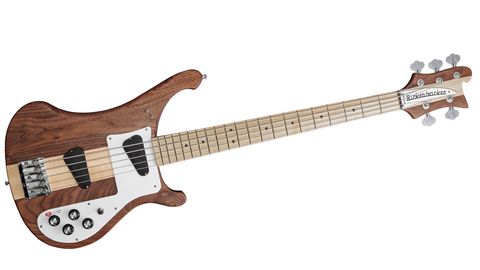 A great bass in every way, although purists might rebel.

The introduction of a five-string bass to Rickenbacker’s immortal 4003 lineage has caused some serious ripples among fans of the brand.

We ran a picture of the 4003S5 under review here on our social media recently, and reactions to the new modifications - specifically the pickup design - ranged from enthusiasm to outright despair. At the extreme end of that spectrum, comments along the lines of ‘Would you add a turbocharger to a vintage Cadillac?’ made it clear that certain bassists were unnerved by the new look.

With all that in mind, how does the thing play? The model we’ve been sent for review boasts a walnut body, an extravagance which explains a substantial chunk of the cost - enough, let us remember, to buy at least three high-quality new or used Fenders. We plug in and find out.

If you’ve played a 4003 before, you’ll be instantly familiar with the overall feel and layout. From the top down, there’s that headstock - still a unique design, all these decades after it first appeared – with a 20-fret fingerboard, a super-flat neck profile and the familiar neck-through construction. The walnut body is sumptuous, of course, and as far as we can tell without using a microscope, the construction is flawless throughout. As it should be, of course, at this wallet-threatening price point.

The 4003’s five-string incarnation was launched last year and has settled in to the portfolio, although the idea of famous Ricky users such as Lemmy, Geddy Lee or Chris Squire preferring a five over the traditional four is still incongruous. What does jar the eye a little is the polygonal pickup design, a much smaller and more modern replacement of the none-more-classic horseshoe unit. The look is undoubtedly cleaner and more sleek than the original, but many of us will prefer the earlier version simply because it’s iconic. A three-position pickup selector controls the two units, the tones from which are modulated by four labelled pots, Bass Volume and Bass Tone for the neck pickup and Treble Volume and Treble Tone for the bridge unit. The last of these has a push-pull function for standard and Vintage tone options. So far, so trad.

Let’s not mess about here. Select both pickups, roll the two tone controls onto max and you’re rewarded with that instant Ricky clank, the sole reason why so many of us love these eccentric instruments. Playing fingerstyle and applying a solid pluck at the front end of the note, that fantastic middy hollowness follows as the note blossoms. It’s the exact sound that you’ve heard so many times and then immediately asked yourself ‘Why does that bass sound like a load of copper pipes being hit with a hammer?’

Crucially, the low B string sounds authentically Ricky-like, but it’s a bit weird to hear notes this low given this classic tone. There’s not much boom, of course, so anything below D feels hollow in the middle somehow: still, there it is, a successful experiment in making an extended-range Ricky that actually sounds as it should. Consider a BEAD-tuned four-string, if fives aren’t your cup of tea but you’re keen to investigate Ricky-fied low notes.

The pickups may differ visually from their predecessors but they sound very similar, with a definite change in EQ profile between the two but no deviation from the twang. The rear unit has some added bite if you need it, but the two tone controls are where you need to go for a serious impact. With both rolled right off, you get a doomy, distant sound with the tiniest bit of top-end crunch, but if you’re doing that on a dark stage, make sure you don’t roll off the volumes instead and mute the bass (don’t laugh; it happens).

As for playability, the rear neck profile is fast and friendly, almost a shredder’s neck in fact - but don’t let that put you off; it still feels solid. The neck width (about 1.84” or 47mm) is easy on the fingers, and the instrument generally feels unexpectedly light. We hadn’t predicted that it would be this easy to lift and move around, but then we remembered Lemmy promising us that his own walnut Ricky was very light when we interviewed him in 2003 (how about that for a name-drop). Turns out he was right.

There’s no getting away from the chunky price tag on this instrument, but as we always say at this point if we’re in reflective mood, you might well bequeath this bass to your kids, who then might do the same, and it could end up being played for the next 100 years. Given that, its cost isn’t prohibitive. Even so, cheaper  i-n other words, non-walnut - versions exist, so there are options. Either way, you owe it to yourself to play one of these wholly unusual, totally rewarding basses.