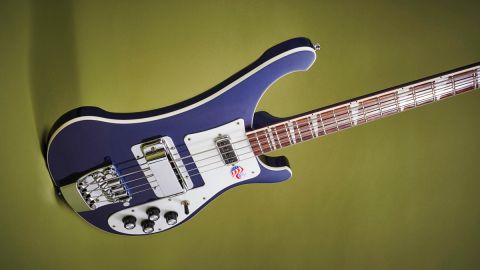 If the sounds tickle your fancy, the pricetag is irrelevant.

If there was ever a bass version of Marmite, the Rickenbacker is surely it.

Although the brand has thousands of fans, there are equally many bassaholics who simply can’t warm to these basses’ features or tones. What is unarguable, however, is the number of bass legends that have used one to great effect: Chris Squire, Cliff Burton, Lemmy, Paul McCartney, Geddy Lee and Roger Glover among them. The list really does go on and on! This particular bass isn’t a new model, but as an example of the current quality coming out of the Rickenbacker factory, we couldn’t wait to get our hands on it.

The 4003 is an iconic bass in visual terms - and this example in Midnight Blue is no exception. The deep, rich colouring sits very well alongside the white scratchplate, truss rod cover and white outer edge binding. The almost orange hue of the 20-fret gloss-coated rosewood fingerboard adds a natural element to the visuals, while the sharktooth mother-of-pearl position inlays add a vintage vibe.

The bass’s body dimensions are broad but slim, and although the instrument is a little weighty, it has a substantial feel. However, certain elements seem a little fragile, particularly in the hardware department, although this is a minor concern. Having said that, this is a design that has stood the test of time; despite some of its idiosyncrasies, the 4003’s components and construction should be up to handling some force, from even the most heavy-handed of players.

All 20 frets are easily accessible, but the rear pickup cover prevents you from playing over the pickup, forcing you to anchor your picking hand behind the pickup or in front of it, closer to the neck. The control set is simple enough, with a volume and tone control for each pickup, a three-position pickup selector and a treble boost courtesy of a push/pull facility on the treble pickup tone control. The elephant-ear machine heads function smoothly and black dot position markers can easily be seen along the white neck binding.

The neck profile is of a slim C shape, while the fingerboard remains consistently broad across its whole length. The 19mm string spacing suits the bass and makes navigating the frets relatively easy.

Surprisingly, we found the bass to be particularly resonant - its distinctive clank was present even before we plugged in. Once we were playing through a cab that clank came to the fore. The meaty, powerful Rickenbacker tone was authoritative, and that familiar hollow sound was easily called upon.

Each pickup has its own, markedly different sound. As you would expect, the neck pickup is significantly more rounded than the rear unit, and does its best to offer a full, ballsy tone that can be suitably coloured with the tone control. The rear pickup takes up a lot of space but it sits in the sweet spot; playing the strings to either side of it gives you a choice of tones. The tone control is your friend when taming the ever- present metallic grind of the strings on the frets; call upon the treble boost option and a noticeable definition appears, which is particularly useful if you’re playing with a pick. It also adds some presence if you’re a fingerstyle player.

Some players, particularly tech-heads who like an array of active tone options, will find that the 4003 fails to cater to their preferences. Conversely, the bass’s look, sound and playability will be nirvana for certain other players. The playability is good but not perfect, although this particular example is blessed with a comfortable medium action, a good setup and no sharp frets. There is significant headstock bias; even when placed on a strap, the head wants to venture downwards - but if you keep it in an angled playing position, you should be fine.

This is an understated bass in a cool, classic way, and much of its history and mystique is still in place. The sounds are familiar and although it’s not suited to all musical genres or playing styles, the 4003 remains a classic. The price is hefty, of course, but nothing sounds quite like a Rickenbacker bass.