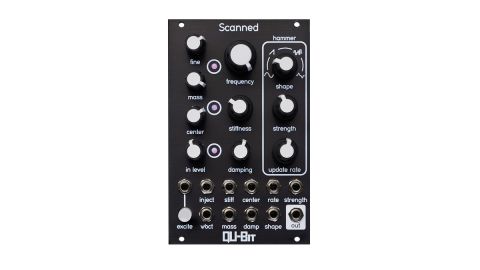 While the scanned synthesis techniques may take some getting used to, Scanned is great fun to play and offers a huge variety of sounds.

Presuming it to be just another morphable wavetable oscillator, we didn’t take much notice of Scanned when it was released.

In fact, it uses a form of digital synthesis never explored in hardware form before. Scanned synthesis was developed by Max Matthews, the father of computer music between 1998-99. It was intended as the next paradigm in digital oscillators - a way to interact with synthesis in a more natural way for live performance and to create new timbres rather than replicate tones from existing instruments.

So how does Scanned work? Mass, Center, Stiffness and Damping control a virtual string of objects that are morphed into a hammer shape and then released. The hammer shape can be morphed between four standard waveforms. This string is then sampled to create a wavetable. It’s a bit tricky to get your head around but you soon get a feel for it in practice. If you have played with Mutable Instruments Elements or Rings you’ll feel at home here.

As it sits somewhere between a resonator, physical modeller and a wavetable oscillator, all those timbres (and some great stuff in-between) are at your fingertips. While it can play well as a standard oscillator, the wide range of dynamic and timbre-shaping controls make it a powerful standalone synth voice. There is a huge world of sound to be found in this module with everything from extreme digital noise to very pure synth tones and horn sounds. In terms of dynamics, the Stiffness and Damping controls work together to offer everything from full drone to slowly evolving pads and short percussive plucks. We enjoyed setting the module to play a continuous droning bass note that we then pulled a rhythm and melody from, as if the notes were rising up out of the mud.

Although in theory the controls are different to a standard synth voice, in practice they often lead to comparable results. Update rate affects how quickly the synthesis engine rescans the waveform, but provides similar sounds to an LFO applied to pitch and cutoff. This seemed often to lead us down the path of dubstep/EDM vocal or formant midrange bass sounds. Think Native Instruments Massive in its most popular usage. Great for layering over a simple sub.

As you would expect with this type of synthesis, all the panel controls are interrelated to some extent and as such this is a module that rewards play. It can be hard to know exactly what you’re going to get out of it, which can yield a lot of happy accidents, but things can also get very noisy very quickly. For example the Mass, Damping and Update Rate controls all have some effect on the dynamics of the sound, so if you want to modulate them you’ll need an external VCA or LPG to tame the output.

Scanned also offers an audio input to excite the string. The obvious thing to throw in here is drums and it’s easy to get a sympathetic synth line going this way. Percussive sounds definitely yield the best results - we tried feeding in field recordings, rainfall, etc, and while the results might have some use for sound designers, they were not particularly interesting.