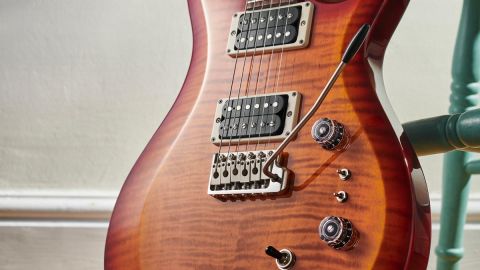 This competitively priced take on one of PRS's most-prized builds is one of the most versatile electrics on the market, offering a tour-de-force of vintage-modern tone and superlative playing experience.

The 24-fret PRS Custom is the electric guitar that defines the brand, a supremely versatile instrument whether it is a Core US model or a more affordable instrument from the PRS SE series.

To mark the 35th anniversary of Paul Reed Smith Guitars, there are three special edition Custom 24s; one in the SE series, this US-built S2 model, and then the tricked-out instrument from the über-deluxe Core series.

Throughout the years there has been a steady evolution of the Custom 24, yet there's still not mistaking PRS's original electric. To some, its double-cut body shape and vibrato, and maple-topped mahogany body and set neck, establishes it as a kind of iconoclastic hybrid of the Strat and Les Paul.

Others just see it as something different, a paradigm shift in guitar design. Either way, it's a modern classic, and the S2 Custom 24, made in the USA but offering plenty change from two grand, is a mightily attractive proposition.

This price sees the 35th Anniversary S2 Custom 24 sits squarely in the category marked out by Fender's American Ultra, Original and Professional series, and Gibson's US production Les Paul Standards.

Besides the truss-rod cover, there's not a lot between the regular S2 Custom 24 and this anniversary model, but the pickups configuration is quite different.

On the regular S2 Custom 24 the pickups are split simultaneously via the tone control's pull-switch, which allied to the three-way pickup selector switch gives you six tones; the 35th Anniversary S2 Custom 24 has an extra two mini-toggle switches for each pickup so you can split the 85/15 ‘S’ humbuckers individually, offering eight different tones.

The 35th Anniversary S2 Custom 24 is like the SE Paul's Guitar in that it offers the true single-coil of each humbucker. The pickup selector is a three-way toggle as opposed to the blade-style lever on the standard run S2 Custom 24.

How does the S2 Custom compare with the Core series Custom 24? Well, there's a more pronounced carve on the top of the Core models. The S2 Custom 24 has a flatter top with the carve sloping from around an inch from the body's edge. It is a quicker procedure, and one of the reasons why PRS can offer the S2 Custom at half the price of a Core model.

The body depth is around 5mm thinner than the Core model, the maple top less figured and the body has none of that deluxe natural binding, but otherwise, there's plenty of the Core model DNA in the S2 model.

Allied to the switching options, you've got eight standard sounds to play with before bringing your tone control into play.

The 35th Anniversary S2 Custom 24 has the commemorative logo on the truss rod cover, but the same PRS-designed low mass locking tuners.

Each pickups has a mini-toggle switch to split the humbucker into true single-coil mode.

Under the hood you'll find a traditional PRS circuit. There are 500k pots wired with a .033 microfarads tone capacitor, and an additional 820kohms resistor on the volume control that 'tunes' the circuit. The coil-splits are Double Pole Double Throw switches that isolates and voices the slug coil, giving you the true single-coil tone.

Elsewhere, the S2 vibrato is the familiar two-piece cast design that you would find on the SE and bolt-on CE models.

Given that this is an anniversary model it is only fitting that the Pattern Regular neck should feel so familiar.

According to PRS, this is a similar neck profile to those made in the late 80s at PRS’s old Virginia Avenue plant, and it is the narrowest PRS profile at the – measuring a little over 42mm, with a depth of 21mm at the 1st fret tapering out to 23mm at the 12th. There is a slight 'V' to the profile, and it's pretty darn comfortable.

• PRS SE Custom 24
An easy to recommend guitar that brings PRS class without a hefty pricetag.

• PRS SE Paul's Guitar
The SE is excellent: the closest yet to a Core model at 20 per cent of the price.

Acoustically, it is good and resonant, and a quick noodle up to the top-end of the fretboard and back bodes well for when it is plugged in. When you do plug it in, well, it sounds on the money as far as a PRS should sound. There's not a whole lot of difference between the tones here and those of the CE models.

The true single-coil mode recalls the classic PRS Fender/Gibson hybrid chat we alluded to at the top of the review, as it presents a super-clear and articulate voice to the S2 Custom 24 that could only be described as Fender-esque.

All too often, split humbuckers sound too weedy to be anything more than a last resort, but not here. These are really upfront, without over-egging the treble. When you factor in the humbuckers, the three-way toggle, and the expansive sweep of the tone control, the S2 Custom 24 is options galore.

The S2 Custom 24 is ideal for the gigging guitarist, or the player who needs a guitar that can cover most styles. While it is not an entry level instrument, the price puts that "PRS original" tone into reach. And with its a great neck profile, super-stable vibrato, locking tuners and sweet finish, the S2 Custom 24 feels very much the pro-quality instrument from a company whose 35 years have been well spent pushing at the boundaries of guitar design.

MusicRadar verdict: This competitively priced take on one of PRS's most-prized builds is one of the most versatile electrics on the market, offering a tour-de-force of vintage-modern tone and superlative playing experience.