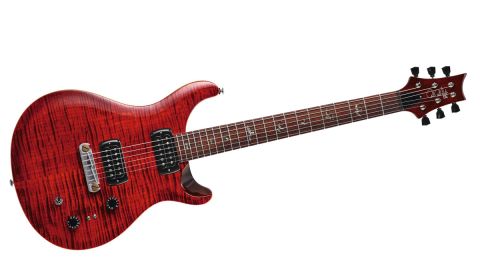 The SE is excellent: the closest yet to a core model at 20 per cent of the price.

Constant evolution wouldn’t be a bad motto for a guitar company who’ll be celebrating its 35th Anniversary in 2020.

PRS has relatively few body shapes, but the classic double-cut outline comes in many flavours and is constantly tweaked and upgraded in the ongoing pursuit of creating a better instrument. In recent years, that focus has fallen on the more Gibson Les Paul-inspired 594 with its shorter scale length, a classic four-control layout and two-piece bridge. And then there was the Silver Sky, a closely Stratocaster-inspired guitar designed to suit the demands of John  Mayer.

It could be argued, then, that Paul Reed Smith’s original vision - a hybrid of both those benchmark designs - has taken a back seat. Well, what better way to put it back on the map than with not one but two versions of the guitar the company founder wants to play?

In simple terms, the guitars appear pretty similar, centred on the original PRS scale of 635mm (25 inches) with a 22-fret rosewood fingerboard, a mahogany neck and body back topped off with a centre-joined slab of figured maple - even the pickups and electrics appear the same in terms of function. Both also employ the one-piece Stoptail wrapover bridge, quite a rarity in the contemporary PRS line-up. Here, we’re looking at the one that’ll set you back £799/$999, the SE.

While this SE obviously employs the now-classic double-cutaway PRS outline, its most obvious difference is that hardtail bridge - all the other double-cuts in the SE range have vibratos. Even then, this one differs from the standard bridge with its small brass inserts directly under the strings’ break points along the pre-intonated ridge. It’s the same bridge used on the core Paul’s Guitar: machined aluminium with aged-looking brass stud posts and steel insets in the body.

Another difference here is the slightly more dished relief of the top carve as it flows from the centre of the top to the rim. It’s similar to the current CE, although the actual concave dishing is narrower here. Depth-wise, the body is 47mm thick - a Custom is 49mm and the McCarty thickness is closer to 52mm. And while the figured maple veneer over the maple top is hardly as detailed or exotic as the core models, side by side with a CE 24, it certainly holds its own and the natural edge is pretty clean.

Look closely, though, and you can see that the back is clearly two pieces of very differently grained mahogany. The joint is offset from the centre, too, and the treble side has quite a flecked grain; the bass side piece is plain. The neck, like the core model, is one-piece, although the headstock widening ‘wings’ are rather mismatched - particularly the one on the treble side, adjacent to the high E tuner - which might upset the PRS detail-obsessive. Overall, though, if you like your guitars light, then this will appeal: at pretty much bang on 3kg (6.6lbs), it’s one of the lightest solidbody PRSes we can remember.

But the significant difference here is the TCI ‘S’ pickups: standard humbucking size but in new mounting rings that ape the proprietary Blackberry-inspired design we see on the core model.

As both rings are the same height, it does mean that the bridge pickup sits quite out of the surround; normally, you’d have a higher ring at the bridge and a lower one in the neck position.

Before we get to the pickups themselves, alongside the master volume, master tone and three-way toggle pickup selector, we get a pair of two-position mini-toggle switches: in down position, they select full humbucking mode; pushed up toward the strings, they select true single coil.

The SE’s Wide Fat neck shape is very slightly fatter than others we play or have measured, and marks a good start to our play test, although we did up the string gauge to 10s. It certainly makes for a slightly less crisp acoustic voice, and clarity is very much a part of what we’re presented with here.

Setup is slick, intonation is exemplary, and there’s a good ring and resonance. Whether it’s that neck feel, or maybe those abalone bird inlays, or the lack of a headstock overlay, there’s something here that’s taking us back in time to the original style of PRS - that early 90s period of change heralded by the first Dragon guitar with its 22 frets and Stoptail bridge, and the subsequent Custom 22 production model.

As we plug in the SE, that old-style PRS feeling continues. There’s quite a contrast between the humbucking and single-coil voices, the latter having a crisp high-end, especially in the neck position compared with our reference Strats.

Then we realise that the neck pickup is placed conventionally with the screw coils facing the neck, unlike the USA version. Reversing it takes minutes and while the world didn’t change, it does add a couple of per cent: for a very un-Strat-like build, we’re hearing a pretty good, clean and present single coil with plenty of woody chop.

The neck humbucker sounds a little thick in comparison, but screwing down the lower four polepieces, like the USA model, subtly cleans things up. It doesn’t sound like it needs that at the bridge, though; it’s a pretty good, quite balanced hot-vintage voice. And while the slug coil is a little brightly voiced, knocking back the tone certainly sweetens it. As ever, the key to maximising the duality of sounds is via the volume and tone.

This guitar reminds us just how valid the original ‘hybrid’ PRS recipe remains for the journeyman player who needs to cover a lot of sonic ground with one instrument. It’s not a Les Paul; it’s not a Stratocaster.

Yet while it certainly references both of those camps, it somehow ends up being very much its own thing. Aside from the effortless playability, intonation, tuning stability and old-world resonance (all foundations of the PRS empire), the single-coil voices from these new TCI pickups raise the bar, while the humbucking side seems to pack musical heat, clarity and considerable versatility in equal measure.