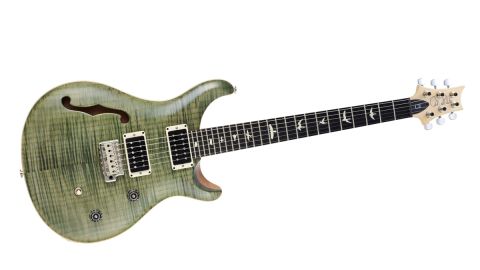 Even though PRS introduced its first bolt-on back in 1988, the CE (originally classed the Classic Electric) has always remained in the shadow of the brand’s premier glued-in neck guitars, from the Custom to the 594.

It had dropped out of production by 2009, and when it reappeared in 2016 it was slightly re-engineered to fill a gap between the newer USA S2 guitars and the start of the upmarket USA Core models. If we’re honest, we expected the revitalised CE to drop out of production after PRS introduced the Silver Sky in 2018, but instead of additions to that John Mayer model (new colours aside), we were pleasantly surprised to see a new CE 24 introduced at the start of this year. If you’re a fan of PRS’s original bolt-on platform, you’re in for a treat.

To be accurate, the ‘new’ CE 24 Semi-Hollow isn’t actually new. It first appeared as the ‘Reclaimed Limited’ (along with a S2 Vela Semi-Hollow) with a peroba rosa top and brauna preto fingerboard, reclaimed woods from Brazil sourced by PRS’s senior wood manager, Michael Reid. That run of approximately 600 pieces of both guitars certainly proved that a semi-hollow CE 24 was viable and also meant any design and tooling was in place should PRS choose to offer a standard version. Which is exactly what this is. A more typical PRS: the satin finished peroba rosa is replaced with a figured maple top, slightly less dished than the original CE or indeed the Core guitars, but with natural edge ‘binding’ and solid bird inlays. This is PRS heartland.

The actual chambering of the one-piece mahogany back is only on the bass side, visible through the unbound f-hole and behind the bridge but not into the treble side. The top is machined inside and out in this area, too. Obviously, the added air has an impact on the guitar’s weight: it trims off a third of a kilo compared with our reference 2016 CE 24 solidbody, which is hardly weighty at 3.45kg (7.6lb).

There are no options to choose from, meaning there’s only the Pattern Thin neck profile, which is a three-piece design like the S2 models. Here, though, the head splice and heel stack are very matched - much more so than our reference CE model - and it’s extremely cleanly done, rather like a Taylor. PRS has largely ridden out the rush to non-standard fingerboard materials in light of the apparently soon-to-be-lifted CITES restrictions and, as ever, the dark, almost black rosewood is just superbly tooled and fettled.

Semi-hollow body aside, the new model remains identical to the solidbody CE 24 with S2 level hardware, including highly efficient top-lock tuners and all-steel vibrato (with a new smaller and black-tipped arm) but with USA-made 85/15 pickups. Like the top carve, there is other evidence of production efficiency, particularly in the plastic backplates that sit proud, rather than being flushly recessed. Do we care? No, not when this one retails at exactly £1k less than the current start-up Core model, the DGT.

There is nothing remotely ‘cut-price’ about the feel of this guitar, and yet because it’s based on the Custom 24 platform (the original 25-inch-scale PRS), it feels so familiar. The 24-fret neck feels almost skeletal and is fully accessible in the upper positions - it pushes the neck slightly further out than a Strat when strapped on, but the guitar hangs so nicely. It’s a beautiful weight that really disappears on the strap. Nothing impedes playability: the mainstream neck shape isn’t far from Fender’s USA ‘deep C’, for example, albeit with slightly less girth in upper positions, and the setup really doesn’t need touching. It plays superbly and once everything has settled in, the vibrato ‘system’ of tuners, friction-reducing nut and bridge offers plenty of travel and stays bang in tune.

In many ways this ‘improved’ vibe translates to what we hear: clear, balanced humbuckers contrasted by the slightly sharper attack of the cleaner, lighter partial single-coil splits. It’s a very easy drive that takes us on a varied path. On the one hand, it simply excels at pretty gained rock and metal where the bridge has clarity and heft; the neck is beautifully soupy and vocal.

Yet clean, it sounds just as good with a roomy resonance for older bluesier lines or strummed jangly rhythm, and there’s a lovely snap from the pickup mix. Although you can hear a roomier, more acoustic-like resonance when unplugged, plugged in it’s a closer call with the solidbody presenting just a bit more thrust, certainly on the rockier sounds. Conversely, the more open resonance really comes alive with a little Americana crunch.

The single-coil voices enhance the crisp clarity, perhaps a little too much at the bridge without some tone control roll-off, but running through some dense modulations you might be glad it’s there. Again, though, that clarity works very well on the neck and pickup mix.

This writer is surprised that, while PRS has released numerous number-titled guitars (the 305, 408, 509, and so on), the company hasn’t done the 241. This CE 24 really is at least two guitars in one: the sort of grab ’n’ go instrument that you could take on virtually every gig imaginable. And, like 99 per cent of PRS guitars we’ve ever played, the tuning stability and its ability to remain in tune is hugely evident here:  a major reason so many of us play them.

Okay, not everyone gets the PRS aesthetic - that’s personal choice - and not everyone sees a bolt-on at £2k as a good value, especially when it’s in just a gigbag. There are no options, either, although we do have a wide colour choice. To add fuel to the fire, it’s not a ‘Strat’ and its not a ‘Les Paul’, but it’s precisely that middle-ground tonality that gives the CE 24 a chameleon-like character that covers so much. The same guitar could be used by one player for energetic classic-to-metal rock or by another as a cool soul and pop rhythm guitar - just two examples of many.

And where so many makers struggle with consistency, PRS isn’t one of them. In fact, we’d say this sample just ups the percentage a little compared to our solidbody CE 24 from 2016. It’s that inherent quality, never cheap, that’s one reason why PRS struggles to make enough guitars. This isn’t going to help: it’s a faultless performance.