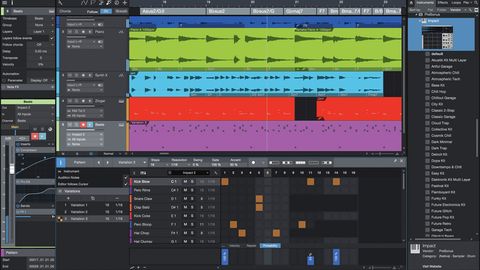 Studio One takes another step forward with the addition of Harmonic Editing, Patterns and the XT instruments.

Through a shrewd combination of innovation, established concepts and razor-sharp attention to detail, PreSonus has managed to embed its forward-thinking Studio One DAW as a prominent feature on the music technology landscape in a remarkably short space of time.

In just over eight years, it’s developed into a feature-packed, fully professional production system for both instrumental/vocal and - perhaps to a lesser extent - electronic music. Version 4 isn’t the most board-sweeping reiteration to date, but there’s certainly enough here to justify the £128 upgrade fee - see the PreSonus website for further pricing details, including details of the cut-down Artist version.

Studio One 4’s biggest new feature is real-time “Harmonic Editing” of monophonic and polyphonic audio and MIDI tracks, enabling a song or individual elements within it to be automatically shifted to a user-defined key and chord progression.

The first part of the process is entering the key signature of the project into the transport section, or extracting it from any MIDI clip. To make a clip viable for harmonic editing, it’s harmonic/chordal structure has to be analysed, whereupon a series of chord indicators appears within it. With that done, a chord structure is manually defined in the Chord Track using the intuitive Chord Selector interface or MIDI input, or automatically extracted from any audio or MIDI clip.

The accuracy of the extraction from audio can be somewhat hit and miss, depending on the character and quality of the source material, but tweaking the results in the audio editor is perfectly straightforward. The chords appear as a series of blocks in the Chord Track: drag them to rearrange the progression, and double-click a chord to edit its Type, Root Note and added note Intervals.

Individual analysed tracks are set to follow the Chord Track via a pair of menus in the Inspector, offering a choice of tracking styles: Parallel for slavish root note tracking, Narrow to shift individual notes to the new chord with as little movement as possible, Bass for monophonic basslines, Scale for targeting of all notes in the scale, and Universal for a lower quality alternative to Scale without the need for prior analysis. Algorithm-optimising Tune Modes to suit a range of instrument types include Piano, Guitar, Strings, etc.

Studio One 4 isn’t the first DAW with this kind of functionality, but it is currently the only one that works with polyphonic audio tracks as well as monophonic ones and MIDI parts, and the results with such material are pretty impressive - as long as shifts are kept reasonably small. Granted, you’ll almost certainly want to re-record that focal guitar line once you’ve set it to a new progression, rather than commit to a processed version with its attendant artefacts (indeed, PreSonus themselves suggest doing exactly that); but the Chord Track is a hugely useful tool at the composition stage.

Studio One 4 introduces two new MIDI programming systems: the Drum Editor and Patterns. The Drum Editor is essentially a percussion-appropriate alternative to the piano roll, appearing as a less regimented stack of horizontal lanes into which notes are drawn or painted as fixed-length triggers rather than stretchable bars. Lanes can be moved up and down in the stack (grouping snares and claps, for example), named, colour-coded and hidden, and all unused lanes can be folded away at a click.

Preset drum maps are onboard for Impact XT (see XT, see?) and General MIDI, with more available to download from Studio One Exchange. Again, the Drum Editor is by no means a new invention, but PreSonus’ implementation is slick, elegant and attractive.

While Studio One 4 doesn’t add any all-new instruments to its roster, it does comprehensively overhaul the Impact drum machine and Sample One sampler, adding the ‘XT’ suffix to both and giving their UIs a very welcome lick of digital paint.

Impact XT is a massive improvement on its rudimentary MPC-style forebear. Now, you get eight banks of 16 pads each to work with, 32 mixer outputs, auto-slicing of loops across pads, velocity layering of multiple samples on a pad, real-time timestretching, choke groups, reverse playback, normalising, a much better filter, colouring of pads and more.

Sample One XT has been even more comprehensively embiggened, with velocity layering and crossfading, recording from any internal or external input, automatic slicing, effects (Chorus/Flanger/Phaser, Delay and Reverb), graphical envelopes, the same filter as Impact XT, reverse, ping-pong looping and real-time timestretching sitting at the top of a long upgrade list.

Both XT instruments stand as major transformations of their humble predecessors. For those who don’t already have their sampling bases covered with third-party offerings (and even those who do), they make for genuinely viable alternatives.

Patterns represent an extension of conventional step sequencing. A Pattern looks like a MIDI clip, but is actually a container for any number of looping step sequences, called Variations, one of which is selected for playback and editing at a time from a list within the Pattern.

Variations are programmed by clicking unaccented and accented steps in with the pencil tool or entering them in Step Record Mode with your MIDI controller, and modified with the Swing, Gate and Accent level parameters. In Drum mode, each lane has its own step number and resolution settings for polyrhythmic programming, and there are dedicated lanes in both Drum and (piano roll) Melodic Modes for Velocity, note Repeat (up to ten notes in a step) and playback Probability, the last introducing a random element. Plugin automation lanes can be added as required.

Patterns’ sequence-switching paradigm integrates well into Studio One, and makes for a fun and very productive workflow that really acts to inspire compositional experimentation. Our only gripe, though, is that there’s no tie option in the sequencer.

There are a few less attention-grabbing improvements and enhancements to report here, too, including AAF and Song Data import, ARA 2 support, ripple editing and a track notepad, but Studio One 4 is mainly about Harmonic Editing, the new MIDI editors and the XT instruments.

As an upgrade for existing users, it’s an easy recommendation. For everyone else, Studio One has long been a DAW with the potential to genuinely change your musical life, and version 4 reinforces that position. If you’ve still yet to try it, there has never been a better time.