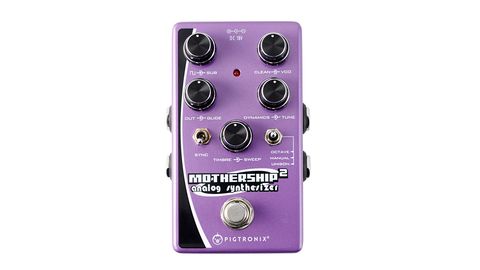 It might not be a pedal that you’d want to use all the time but the Mothership 2’s small footprint makes it a great way to add that monophonic analogue synth flavour to your pedalboard.

We all know about guitar synths by now: a hexaphonic pickup fixed to your guitar connecting to an external unit with MIDI will give you access to any sound you like.

But there is also the other genre of guitar synths: those that come in a stompbox and allow you to just plug any guitar directly in and get a more focused, but limited, range of synth sounds from the output.

The original Pigtronix Mothership, first seen about nine years ago, was one of the latter. But now the US company has introduced its successor, the Mothership 2, which moves the show onwards thanks to advances in technology, and allows them to make the claim that it has the world’s fastest pitch-tracking circuit. It is much more compact and pedalboard-friendly than the original too, partly because it utilises dual concentric knobs to adjust 10 parameters.

The Mothership 2 is a monophonic, three-voice synth. This means you can only play one note at a time, but the resulting synth sound is constructed from three oscillators that can be mixed in proportion from the pedal’s top row of knobs. There’s VCO (triangle wave) and square wave voices, plus a sub-octave sine-wave voice - this sub is designed to get trouser-flappingly low, which may be a bit much for some guitar amp speakers, so you get the option of sending it from a separate output on the pedal. Sticking a jack into the sub output separates it from the main signal. You can choose to have synth sound only or can mix your dry guitar sound in proportion with it.

When you’ve combined the voices and found a basic sound you like, you have three choices (via a toggle switch) of setting a pitch for it. It can be an octave above your guitar sound, in unison with it or set manually at an interval (Maj 3rd, 4th, 5th) with the Tune knob.

That knob is also active in Octave and Unison modes, as you need to set it to match your guitar’s pitch - it’s meant to be in tune at 12 o’clock, but setting small dual concentric knobs is a bit fiddly and, although there’s a clearly marked spot on the inner knob, it’s hard to see the outer one, so tuning by ear is necessary.

Pitch tracking is instant and very good but it does help to be precise in your picking so as to avoid triggering unwanted notes and glitches. The Dynamics control will help as you can use it to set the velocity sensitivity to suit your playing. Further variation is provided with the glide control, which dials in pitch-following portamento between notes, so the sound seems to swoop from one note to the next.

There’s certainly plenty to explore here, with the juxtaposition of the four available voices, principally the smoother triangle wave and the rougher-edged square wave with its more harmonic content, offering subtle variations on a fat analogue synth sound, with use of an expression pedal for some pitch-bending adding nuance to any performance.

Another mode for the pedal is the new Sync effect, which slaves the triangle and square wave oscillators to the input signal resulting in a pitch-locked, unison sound, so you don’t have to resort to setting the tune knob. The sound here feels really fat and solid, and Sync mode brings the Timbre and Sweep knobs into play to adjust the texture of the sound and the pitch of overtones to really focus on tailoring animated tones. In this mode the Glide knob is configured to sweep through the overtones, as is the expression pedal.

With single notes only, the pedal lends itself to playing solos and riffs. Soloists wanting to expand their tonal choices will find new voices here whether soloing with a purely synth sound or mixing it with the main guitar sound - we like using the pedal to create huge growly abrasive riffs on the lower strings. There are some heavy sounds you can create on six-string and, of course, bass players looking for that something extra to thicken up their sound can take that further.