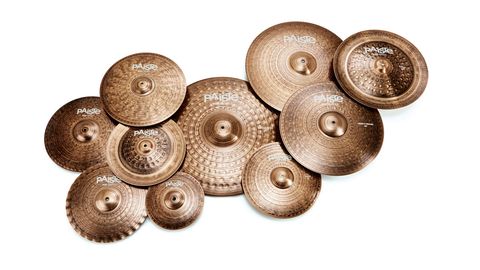 The 900 series is hugely impressive - a generous selection of diameters and a quality of sound that belies the price-point.

Paiste’s 900 Series is an all-new line that occupies the price point held by the company’s now discontinued Alpha series.

Launched without advance publicity at this year’s NAMM, it is packed with a comprehensive selection of crashes, splashes, hi-hats, rides and chinas.

Paiste is keen to stress that, rather than be considered as a direct replacement for the Alpha series, 900 cymbals represent a new direction in terms of sound and manufacturing.

In common with Alpha cymbals, 900s are made from Paiste’s legendary CuSn8 bronze, the B8 alloy that has powered 2002 cymbals since 1971. Thereafter, all resemblances cease, as 900 cymbals are more intensely worked, have a wider sound palette and enjoy ruggedly handsome looks.

Much of what goes on behind the doors of Paiste’s HQ is shrouded in mystery and 900 series cymbals are no different. Paiste refers to ‘sophisticated hybrid techniques’, which translates as a mixture of automated processes and traditional hand hammering and lathing. A darkening process - also a closely guarded secret - imparts the equivalent of a patina, that emphasises the lathing grooves and hammer marks.

Rather than send a representative selection of 900 cymbals Paiste sent the entire range to Rhythm towers. Crashes are the most abundant, with the 10 options taking in diameters from 16" to 20" in two different weights. A total of five rides, four pairs of hi-hats, three Chinas and two splashes complete the series.

The crashes seemed the logical starting point, though setting all 10 up at once proved a logistical challenge that made us grateful that we’ve never had to tech for Mike Portnoy.

Paiste 2002 crashes are renowned for blending muscular warmth with a sparkling top end, cutting through without ever sounding harsh. That characteristic smoothness is present in the 900 series regular crashes from the 16" upwards. They are quick to open and the balance between the initial brightness and deeper note is spot on.

Each 1" increase in diameter brings a step down in overall pitch and a notching up of the volume. By the 20" model the response is close to 11 territory, with a lingering - yet still measured - decay.

In a straight comparison, the Heavy crashes are a fraction higher in pitch whilst possessing a good deal more projection. The extra weight and larger bells affords them extra zing and sharper focus. They punch through with ease and, from the 18" model upwards, provide a meaty bell sound to boot, adding a dash of versatility.

After the jostling-for-dominance dynamics of the crashes, the splashes seem polite and keen to avoid offence. The 10" is silvery-bright and quick; the 12" no less sweet but a tad richer in note and longer in fade.

Rides come in 20" and 22" diameters in regular and heavy weights along with a single 24", which has the splendidly unambiguous title Mega. The pair of straight rides offer a clear stick sound with leanings of woodiness over a good spread of unobtrusive wash. Of the two, the 22" is naturally more expansive in feel and tone.

Moving onto the Heavy rides brings a stick sound that is closer to glassy - a strong ping over a more controlled wash. A flick onto the bell brings an equally unequivocal response that will be heard in the loudest of settings, particularly the 22". Which brings us to the 24" Mega ride. We’re unsure whether to class it as a musical instrument or an aural weapon; let’s just say earplugs are mandatory.

Of the four pairs of hi-hats three share 14" diameters while a solitary 15" pair makes up the quartet. The regular 14" pair are crisp and controlled, erring on the bright side but not without a degree of warmth.

Continuing with the theme, the 14" Heavy hats would slot seamlessly into the role of narky older brother with their more aggressive response and insistent tone. Completing the 14" trio is a pair of Sound Edge hats. The distinctive wavy bottom cymbal brings with it no small increase in speed and clarity.

With eyes closed, you’d be forgiven for mistaking them for a smaller diameter, such is their sharp and precise nature. The single pair of 15" hats are designated Heavy and the fat note they elicit is capable of swaggering through pretty much any backline. They have a depth and broadness beneath the attack, and sizzle assertively half open.

We enjoyed the 15" the most and we are a little mystified as to why there isn’t a regular weight 15" pair. Yet.

Between them, the three chinas tick the boxes marked dark, dirty and trashy. Not particularly nuanced, they’re accent cymbals ideal for adding punctuation in an impossible-to-ignore manner. The 18" is unsurprisingly the loudest, but the 14" and 16" models both pack a lively punch.