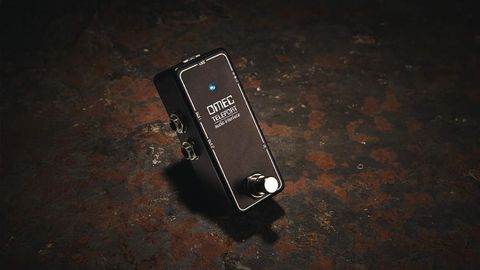 Effectively, if you don’t mind taking a laptop on stage, this pedal can be anything you want it to be. In all, a very useful widget.

It might look like a standard micro pedal, albeit one without any knobs, but the Orange OMEC Teleport is actually an audio interface, and a class-compliant one at that.

This means that it doesn’t need any drivers installed on the device to which you connect its USB output, whether a laptop, tablet or phone (the unit is compatible with iOS, Android, MacOS or Windows devices).

So why put an audio interface into a micro pedal chassis? Well, the idea is that you  can stick it into your guitar signal chain, possibly installed on your pedalboard, to take care of a couple of different functions. The obvious one is to send your audio signal via USB to a DAW for recording or for practice using amp sim software, which it does extremely well.

But the clever option is to use it to access amp sims or effects that you may be running and add those as part of your live signal chain, bringing them in or out using the footswitch. You can get stuck into using it straight off the bat as the pedal comes with a computer-based version of IK Multimedia’s Amplitube CS Orange Edition, which gives you access to simulations of Orange amps and matching cabs.

The Teleport takes a 9V DC input just like any other micro pedal so you can run it from your pedalboard’s power distributor. It features buffered bypass and takes a mono input, but also has two outputs so you can run in stereo. This will allow connection in your signal chain or it can be used to connect to a monitoring system if you are using the Teleport by itself.

Obviously with using something like this, the big question has to be about latency: Orange is quoting a minuscule 7.4 femtoseconds (that’s a millionth of a nanosecond, just so you know) for the  AD conversion and we didn’t encounter any problems when accessing the software on our devices.

We ran the pedal into our iPad using Apple’s Camera Connection Kit to access amp sims including BIAS. Connected to a Mac we made use of the standalone version of Amplitube and also successfully used it with Jam Origin MIDI Guitar - software that converts your guitar’s analogue audio signal into a digital MIDI signal.

We also used it to access plug-in effects in Logic and in GarageBand (running Line 6’s Helix Native plug-in). With the 6.4mm inputs and outputs as part of the pedal chain, Teleport added effects from the computer both individually and with several engaged for a composite sound: we used it to instantly switch in flanger, delay and reverb at once.

As long as you have the output volume in the software adjusted appropriately to match the rest of your signal chain, it can work just like any other stompbox. Effectively, if you don’t mind taking a laptop on stage, this pedal can be anything you want it to be. In all, a very useful widget.