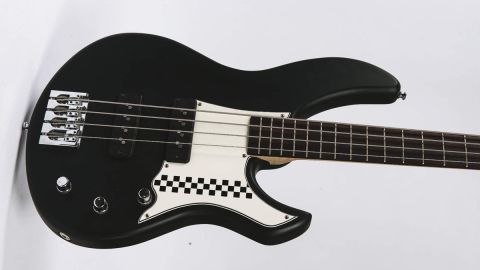 After finishing his apprenticeship as an organ builder in Germany, Oliver Lang needed a job.

He’d enjoyed his years in the workshop, surrounded by skilled artisans building classical organs, but his passion in life was bass - and so he decided to use the skills and knowledge he’d gained to build the highest-quality custom bass guitars. He duly set up his own workshop, and it’s taken just a few years for him to find himself among a select group of highly respected German luthiers. Playing this Rumo 4 bass, it’s easy to see why musicians and fellow bass builders alike hold him in such high esteem.

The construction and materials of the Rumo 4 are all pretty traditional, and not just by chance. “I wanted the Rumo 4 to have a warm tone and vintage feel,” Oliver told me from his stand at the London Bass Guitar Show this year, “and that starts with the woods used, in this case alder for the body and a maple neck with a rosewood fingerboard.”

We’re big fans of alder-bodied basses, as they tend to have a rich, warm purity that’s difficult to replicate on instruments made from maple or ash. Imagine the warmth of mahogany combined with the focus of maple, and you’ll get an idea of what we mean. Alder also has the added benefit of being less dense than either ash or maple, and therefore contributing to a lighter build overall.

The hardware is among the best available too, with lightweight Hipshot cloverleaf tuners and a precision-engineered ‘A Style’ bridge. All the ironmongery is in chrome, which combines with the traditional scratchplate and the original - but understated - body style to give the Rumo 4 a fresh appearance that still delivers a real retro vibe. That’s a neat trick to pull off.

The pickups are the brilliant Nordstrand Big Splits - supercharged split-coil Jazz-style pickups with absolutely tons of tone and character. These are controlled using a simple and elegant passive preamp consisting of just a volume, pickup pan and single master tone control. You may think that this sounds a bit limiting, but before you jump to any conclusions, read on.

Although the Rumo 4 has a standard 34” scale length, It somehow feels smaller than that. Partly this is due to the fact that it’s incredibly light, and because the balance - either when seated or played on a strap - is close to perfect. The bass we played at the show was set up to perfection and a joy to play. In terms of width, the slim neck is almost exactly halfway between that of a standard Precision and a Jazz bass, so whatever you’ve played before, you’ll find this comfortably familiar.

Passive instruments are once again gaining in popularity – for a reason. Over the last 20 years or so, many of us have become used to powerful 9- or 18-volt active basses. However, fiddling with half a dozen knobs and switches, desperately trying to get back to the sound you liked just a few moments earlier, can be frustrating - especially mid-gig - and once you’ve tried the simple pleasure of using cut-only tone controls, you’ll find it hard to go back. They certainly suit this bass; there’s a purity of sound here that you just don’t want to mess with too much.

Despite these deceptively simple controls, there’s a wide range of tone available, all centred around a powerful but refined Fender-ish bass sound. For me, it works best when you slightly bias the front pickup, whacking the tone and volume up full. Now you have a sound that’ll sit with a solid backbeat and provide your band with a foundation you could build a house on.

The natural tone of any bass is, to a large extent, defined by the timbers used - and like the early Fender Jazz and Precision basses, the alder body and maple neck of the Rumo 4 give it a warm, pronounced mid and solid low-end thump that will sound great no matter how you set the tone control. So are there no criticisms at all? Well, one small issue here is with those tuners. It’s purely an aesthetic thing, but to me they look a little outsized for the small headstock. Perhaps it’s the fact that they’re angled rather than square to the neck? Whatever, it’s a purely subjective quibble; you may well like the way it looks. Of course, if you don’t, you could always specify alternatives when you order your own instrument.