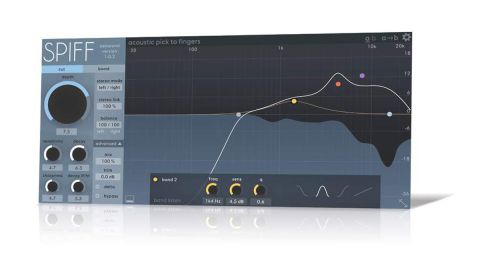 Just like it’s stablemate, Soothe, Spiff, the second plugin from Helsinki’s oeksound, was originally designed as a corrective processor for vocals, but “turned out to be an equally useful tool on almost any sound source”.

Both are based on dynamic EQ technology, but while Soothe puts it to use as a de-esser/harshness-fixer, Spiff - first developed as a reducer of ‘mouth clicks’ - redeploys it in the form of a frequency-conscious transient shaping device.

Spiff is modal in its processing ‘polarity’, in that it either cuts or boosts, as determined by the so-named buttons at the top left. The Depth knob collar and response graph switch between blue (Cut) and pink (Boost) to make it instantly obvious which mode you’re in. The only control that’s independently adjustable for each mode is Depth (see below) - the rest maintain their settings regardless of mode selection.

The Sensitivity parameter establishes how heavy a transient has to be for the algorithm to respond to it: the further it’s turned clockwise, the more sensitive to low-level transients the plugin becomes. The other three controls sitting alongside it are rather less intuitive, so the Delta button, which solos the difference between the wet and dry signals, proves indispensable.

Sharpness sets the bandwidth of the cuts and boosts - keep it tight for creative effects, and broader for drums and other instruments. Decay represents the cut/boost recovery time - ie, how long it takes for the signal to return to its original level after processing. The decay time can be tilted between high and low frequencies (with the fulcrum at 1kHz) using the Decay LF/HF knob: anticlockwise, low frequencies take longer to decay than high frequencies; clockwise vice versa; and in the centre, decay is equal for both.

With those four all-important dials set, and any frequency response tweaks made in the EQ section (see Equal opportunities), the Depth knob sets the amount of cut or boost applied to the transients, Trim compensates for overall gain changes, and Mix handles the dry/wet ratio.

Spiff is well endowed in terms of stereo processing options, too, with a choice of Left/ Right or Mid/Side modes, both with Balance and Stereo Link (0% for dual mono; 100% for equal processing in both channels) controls. Finally, the Advanced panel contains various quality options, including up to 4x oversampling.

Spiff makes for a worthy partner to Soothe, delivering a sort of ‘vertical’ equivalent to the latter’s more ‘horizontal’, resonance-taming action. As expected, it does a superb job of solving plosive vocal issues, but it also works wonders on drums, guitars, keys and other transient-heavy instrumentation, reining in excessive attacks in Cut mode without affecting surrounding material, and enhancing front-end energy, clarity and punch in Boost mode.

The majority of Spiff’s interface is taken up by a five-band sidechain EQ and its accompanying real-time frequency response graph. Utilising three switchable parametric/shelving/tilt bands flanked by high- and low- pass filters, the EQ influences the amount of transient cut or boost applied by Spiff across the frequency spectrum, rather than directly equalising it. Ie, instead of changing the gain, each band offsets the Depth parameter for the frequencies under its curve. So, you can use the filters to take extensive high and low frequency ranges out of the processing altogether, and shape the parametric/ shelving/tilt bands to emphasise or reduce the effect in specific areas.

Band frequencies and Q widths are adjusted by dragging and scrolling, or by twisting the Frequency, Q and Sensitivity knobs in the contextual pop-up panel. There, you’ll also find the Band Listen button, which solos the delta signal for the selected band.

If we could add some things, though, they would be the ability to assign Cut and Boost per-band; access to the crossover frequency for the Decay LF/HF parameter; output auto-gain; and independently-adjustable controls in Cut and Boost modes. The last would add to Spiff’s credentials in the ‘experimental’ department, where you might want to flip between different setups for each mode. As it stands, though, this is a powerful, innovative transient wrangling plugin for mixing and sound design.