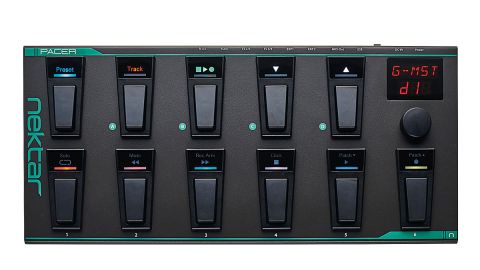 Most of us favour MIDI keyboards for note input which frequently offer rafts of dials, switches, knobs and sliders to allow our fingers to perform parameter changes too. The closest you probably come to using your feet as part of the creative process might be if you have a sustain or expression pedal connected to your controller keyboard.

Foot controllers, as a result, have largely remained the preserve of guitar players, with effects pedals - often connected to multi-effects hardware or software - a popular approach. That said, more advanced options for studio-based guitarists who’d like to keep their hands free, while operating a DAW, are also more limited than you’d expect. Nektar’s Pacer could well pique the interest of both camps.

Pacer’s main USP is that it allows you to configure MIDI control messages which you can target at the parameters of your choice. A basic example: you can assign starting/stopping on your DAW to one pedal switch, with the next one allowing you to step through program changes from one song to the next while further pedals trigger MIDI notes or phrases. For a guitarist using, say, Guitar Rig, this is self-explanatory, but you could equally cycle through synth presets or move from one section of your live set to another.

Pacer goes further, letting you build relays of control messages, so that a single pedal click can instantiate a number of messages triggered at once. This has massive potential; use it to switch multiple sounds or sound parameters across a production simultaneously, or as a ‘musical director’, switching patches, electronic drum configurations, guitar effects settings and even reverb for a lead vocal, at once, for a whole band performing live.

Round the back, you can connect further control power in the form of up to four external foot switches and two expression pedals. For non- guitarists, these latter two options are significant, as they put the potential for control over 128 steps of MIDI data at your feet. Literally.

Guitarists whose amp solutions are software-based will love that they can navigate Record Mode in their DAWs without moving their hands from their guitar strings. Equally, it will appeal to live electronic musicians who want to add a powerful collection of MIDI control options to their rigs whilst keeping their hands free to perform. It’s not such an immediate solution for non-guitar playing studio-based musicians, who have less of a need for the kinds of real-time switching at which Pacer excels. If your workflow would benefit from putting foot control front and centre, though, Pacer merits a serious look.