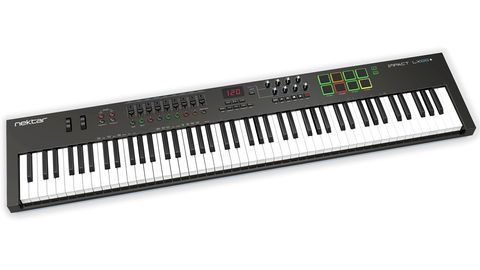 The LX88+ combines a pretty good keyboard with extensive DAW integration, and is about as good as you’ll get at this price point.

Today’s buyers of keyboard controllers are spoilt for choice, but if you’re looking for a full piano size 88-note keyboard, said choices are more limited.

One option is Nektar’s Impact LX88, which has just had an upgrade.

These include dedicated Mixer and Instrument buttons for pre-mapped control of mixer settings (level, pan, mute and solo) and virtual instrument parameters (envelopes, filter and so on). Knobs and faders have soft takeover, updating values only once the current software value is reached, and many common DAWs are supported (Logic/GarageBand, Bitwig Studio, Digital Performer, FL Studio, Sonar, Studio One, Reaper, Reason and Cubase/Nuendo). Nevertheless, be aware the pre-mapped editing doesn’t extend to mixer plug ins.

Other features include 5-pin MIDI output, assignable footpedal jack, 9V DC input for situations where USB power is unavailable, separate pitch and modulation wheels, and keyboard zoning (up to two zones) and layering (up to two layers) via the Layer and Split buttons. Rounding things off is a three-digit red LED display that shows outgoing MIDI controller values, and in rather old-fashioned MIDI keyboard style is also used alongside the keyboard keys to edit various keyboard settings.

So what does the update bring to the table? First up, the pads have been overhauled and are now more sensitive, plus the pads and a number of buttons are now backlit and colour-coded to indicate their current function.

Next up, three new buttons have been added. Default/User next to the rotary encoders doubles up this bank of eight knobs, providing 16 assignments in total. Meanwhile Clips and Scenes next to the pad bank provide additional operational modes for the pads that are incorporated into the DAW integration. Examples include setting up of markers (Logic Pro X) and activating scenes and clips (Bitwig).

However, it’s the underlying DAW integration where things have improved most. Here, assignments have been standardised across over 100 common VST instruments, so typical functions such as amplitude and filter envelopes, filter cutoff and resonance, oscillator pitch and level appear on the same physical controls. This has allowed them to confidently provide proper labelling of the sliders and knobs, which bearing in mind the number of supported DAWs and instruments is no mean feat. Nevertheless, as a user it’s the sheer predictability of it all that counts.

Despite the number of features, the LX88+ is reasonably compact and at 18 kilos light enough to be portable. What’s more the keys feel good and the mechanical noise is quite low (both factors that are often lacking in more affordable keyboards).

The LX88+ won’t suit everyone (and some 88-key users will be after a full weighted hammer action). But at £300 (and with a free copy of Bitwig 8-Track bundled) it’s a bargain and well worth testing.