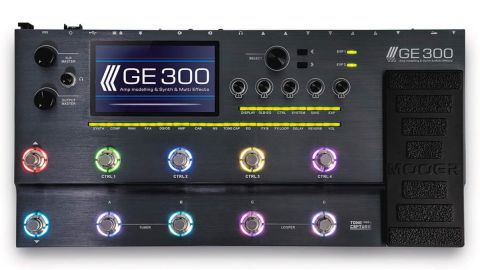 Mooer's GE300 is a slightly more affordable approach to high-end multi-FX, and a worthy competitor to Line 6 and Boss.

Mooer made its name as a purveyor of small, budget clones of famous circuits, and was responsible for nano-sized pedals becoming a space-saving staple.

More recently, the Chinese company has looked to push its image and products upmarket, taking on ambitious projects like the Ocean Machine collaboration with Devin Townsend. Now, it’s back with the GE300, which has the Line 6 and Boss floorboards squarely in its sights.

With the current generation of modelling floorboards, the big difference between Boss and Line 6 is user interface - both companies are more than able to design great effect algorithms. Where the Line 6 products have the edge is in a more intuitive user interface, and it’s here that the Mooer must compete if it wants to be a viable alternative.

Happily, we didn’t need to reach for the manual besides for some very niche tweaking, and the large colour screen and row of parameter knobs allowed us to set up new patches and edit existing ones with ease. Moving blocks is easy, a matter of clicking the selector knob and adjusting left or right, and the quick-select strip is a nice touch when editing a longer chain.

In terms of sounds, there’s a decent cross-section of classic amps, from Fender tones, to Marshall, to modern US-style, which are actually pretty impressive. Similarly, through headphones we couldn’t find much to complain about with the built-in cab IRs, and the ability to load external ones means any weak presets are easily changed.

As you’d expect, there are also plenty of great effects, although here it does feel like Boss and Line 6 have the edge, both in terms of range and quality of patches. The overdrives and distortions hold up pretty well, and there’s enough spare headroom on the unit to push a tube amp into breakup using a boost or overdrive.

Much has been made of the fact that the GE300 also comes with a monosynth, and we can report that this certainly delivers, with multiple oscillators and bags of customisation on offer.

In the final estimation, then, the GE300 is a big step up. It looks the part, it’s bombproof, and true to Mooer form, it’s smaller than its main competitors and more affordable, too. Whether or not it proves a success is likely to be more about whether guitarists can shed the image of Mooer as a budget brand, but the GE300 makes a particularly compelling case to take the company very seriously.