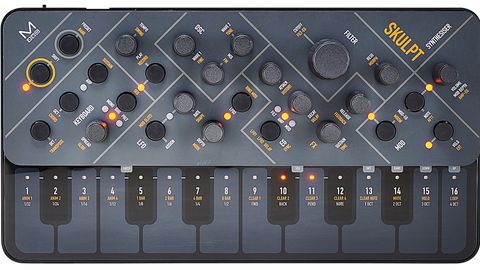 Skulpt exists in a crowded market, but there’s no doubt that it gives you a lot back for the price.

Unveiled via Kickstarter last year, Skulpt is something of a departure for British synth brand Modal Electronics.

Best known for the ‘00’ range of synths, Modal has built its name on high-end instruments that combine analogue circuitry with cutting-edge electronics; machines packed with quality features but with price tags upwards of £2k. While the brand has dabbled in the affordable end of the market with its Craft kits, Skulpt is its first proper mass-market instrument, which aims at condensing some of their high-end aesthetic into a sub-£300 polysynth.

Unboxing Skulpt, it’s obvious that it shares a certain ethos with its higher-end cousins. The look is sleek and modern, with a clearly laid out interface that’s easy to navigate. It’s also obvious where costs have been saved though; the synth’s housing is all plastic and lightweight, and the touchstrip ‘keyboard’ along its bottom edge is completely flat with no tactile response.

Connection-wise too, the headphone and line output jacks, pulse sync in/out jacks and USB port are all of the mini variety - although Skulpt does find space for full-sized MIDI in and out connections. The bonus of this lightweight design, of course, is that Skulpt is a highly portable instrument, a factor enhanced by the fact that it can be powered by either six AA batteries or its USB connection. It also comes with a smart case/stand - added as a Kickstarter Stretch Goal - which can protect the top panel when not in use, or sit beneath the synth to change its naturally slanted profile to a flat one.

Inside, Skulpt is fully DSP-powered, using a virtual analogue design that differentiates it - some may argue to its detriment - from the many ‘affordable analogue’ rivals at this price point. What Skulpt lacks in analogue authenticity, however, it makes up for in sonic heft; with four voices and eight oscillators-per-voice, its synth engine packs more power than you’d find in any budget-friendly analogue instrument - or even one three times Skulpt’s price.

There are design elements from Modal’s top-end instruments too though - albeit in digital form - most notably the morphable oscillators and filter designs. The oscillator section is built around two waveshape controls, which can morph continuously through a variety of waves. The range of shapes differs slightly for the oscillators, with both offering basic sine, triangle, saw and square, but with slightly different forms of pulse from osc 1, and osc 2 also doubling as a filterable noise source. Skulpt can also engage frequency modulation between these oscillators - with wave 1 as the carrier and 2 as the modulator - and is capable of ring mod too.

The synth gets most interesting when playing with voicing modes and using that abundance of oscillators. It has three available modes: four-voice poly, duophonic and monophonic, with the 32 available oscillators divided accordingly. A Spread control lets us make use of these, introducing unison and stacked oscillator modes. The first half of this dial detunes and evenly spreads the oscillators for thickness; beyond halfway it defaults to arranging oscillators into a selection of preset intervals and chord shapes. This section also offers oscillator pitch transpose and glide control. The filter meanwhile, is a 2-pole resonant design that can continuously morph through low-, band- and high-pass modes. In practice this is a pretty handy sound design tool; at the mid point between modes the filter introduces shelving, effectively allowing the filter to act as, for example, a low-pass filter and low-shelf EQ at the same time. It’s a slight shame that resonance and filter morphing share a control on the front panel (morphing is accessed by holding Shift) as it would be fun to have hands-on control to sweep both of these parameters at the same time.

Skulpt features both an arpeggiator and a sequencer. The former has four directional modes - forward, backward, pendulum and as played - along with adjustable beat division and a range of up to four octaves. The sequencer, meanwhile, can be programmed with up to eight bars with four-note polyphony. The sequencer can only record in real time, so there’s no option to input or edit patterns on a note-by-note basis. There is a metronome available though, plus a quantise function that can be set to snap notes to the nearest 1/32, 1/16 or 1/8 beat. There are also four tracks of automation available. Again, these are recorded and edited in real time, by simply hitting record and then turning the appropriate rotary. Each of the four lanes can be engaged or disengaged via a shift function of the touchstrip keyboard. There are repeat and loop functions too, also controlled via the touchstrip, which allow either individual steps of selections or the sequence to be repeated on-the-fly for inspirational results.

Beyond this, the design of the synth engine is fairly straightforward. There are three ADSR envelopes, for filter, amp and an assignable Mod Env. There are two LFOs too, the first of which is global and applies to all voices simultaneously, the second affecting each synth voice individually. Skulpt packs a flexible modulation matrix with eight available sources - the mod envelope, two LFOs, note, velocity, aftertouch, mod wheel and CC - and a total of 32 available destinations.

At the end of the chain is a pair of effects - a one-knob waveshaping overdrive and a digital delay with time, feedback and wet/dry controls. Both sound good, and can be modulated via the matrix for creative results. It’s a slight shame that Skulpt’s outputs are mono, as a bit of stereo spread from the delay would be an excellent finishing touch here, but it’s not a deal-breaker at this price.

Eagle-eyed readers will notice that Skulpt has no screen, which can make setting up modulation assignments or exploring the complexities of the voice modes tricky using the hardware interface alone. Fortunately, Modal has a free control app available on desktop, iOS and Android, which offers full control over the synth with more comprehensive visual representations of each element. This app provides a handy window into what’s going on under the hood of Skulpt, and we’d recommend new users try it, as it’s by far the simplest way to get your head around how Skulpt works. Technically speaking, there’s nothing you can’t do with the hardware interface alone but working with, for example, the Spread’s chord assignments, is far easier with proper visual feedback.

As for the hardware interface itself, we like the design of Skulpt’s rotary-packed control layout, which divides the synth’s various elements into uneven, tessellating sections. There are a fair few functions that require shift presses, but on the whole there’s a good level of hands-on control. From a visual point of view, more colour variation would help differentiate sections of the control panel and speed up the workflow, but it’s generally fairly easy to navigate.

Sonically, there’s a lot to like about Skulpt. As mentioned, stacking and spreading the oscillators can quickly result in a thick, weighty sound that belies its compact size. The modulation options make it easy to add interest and movement too. The included presets tend to lean quite heavily toward textural pads and ambient sounds, which particularly suit the setup of Skulpt’s synth engine. That being said, it’s a flexible instrument and capable of a good variety of synth sound styles, from modern, frequency-filling basses to trance-like chord progressions, bubbling FX and much more besides.

Personally, we’d have liked Skulpt to lean into its digital nature more heavily. It’s at its best when making the most of its voice modes, FM and ring mod and creating complex modern sounds rather than replicating vintage-style patches. Used as a straightforward virtual analogue synth, it’s solid, if not unrivalled - plugins such as u-he Diva or Arturia’s V Collection do a better job of faux-analogue, and Roland’s Boutique range sound more authentically vintage in the digital hardware realm. Compared to something like Novation’s Circuit, which incorporates wavetable oscillators, or Elektron’s Digitone, with its array of weird FM percussive sounds, Skulpt feels a little like it’s playing down its digital synth engine, rather than embracing it. That said, it crams a mammoth amount of subtractive power into a compact and cheap package, and it’s hard to scoff at how much sonic power you get for your money.

The compact hardware synth market has ballooned in recent years, and Skulpt faces stiff competition at this price point. For its flexibility and breadth, it’s worth checking out though. If you’re happy to deal with the app for some sound design duties and an external MIDI controller to replace the fairly weak touch keyboard, you can get a lot of sonic power for your money here.