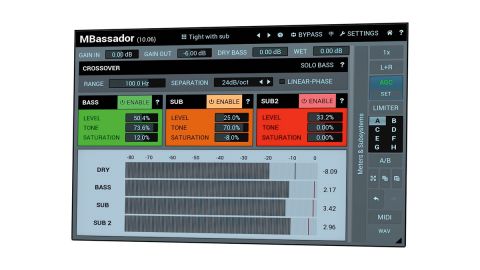 When it comes to shoring up electric and electronic basses, kick drums and other low-end noises, MBassador is simple but fantastically effective.

While EQ is any engineer’s first choice for coaxing more bottom end out of bass and drum parts, when those low frequencies aren’t there in the first place, it’s usually time to start thinking about rerecording or perhaps pressing an underpinning sub bass synth into action.

With its latest plugin effect, MeldaProduction reckons it has a preferable alternative: MBassador (VST/AU/AAX) is designed to tighten up and embiggen your bass sounds.

What actually constitutes ‘bass’ in the ears of the plugin is determined by the Crossover section at the top of the interface. This splits the input signal into two bands at anywhere from 20-200Hz, using low- and high-pass filters, the roll-off slopes of which can be set between 12dB and a super sharp 120dB/octave.

Essentially, it’s a low-pass filter for processing: only frequencies below the crossover are resynthesised, while everything above is left untouched (hit the Solo Bass button to hear the former in isolation). The idea is to set the frequency Range as low as you can before the fundamental note of your bass or kick starts to suffer. The same goes for the Separation slope, which should be at its lowest possible setting to avoid phase distortion, or used in Linear-Phase mode at high settings.

MBassador’s three processors resynthesise the filtered bass signal and generate sub bass signals one and two octaves below it. Each module has its own bypass button and level control, and their output levels - along with that of the dry signal, also adjustable - are metered in the lower half of the GUI.

The Bass module resynthesises the user-specified low frequencies (the fundamental note ideally), enabling manual control of their level and harmonic filtering via the Tone control.

Harmonics are introduced in the first place by overdriving the built-in amplifier with the Saturation slider: at its default central setting (0%), ‘optimal’ saturation is applied, adding enough harmonics to increase presence without wandering too far into the low-midrange. At -100%, no saturation is applied; and at 100%, the low mids become really quite prominent. By balancing Tone and Saturation, it doesn’t take long to find that sweet spot between punch, tightness and body.

The two Sub generators have the same three controls, providing tweakable low and really low bolstering sub harmonics that can be used for everything from basic low-end reinforcement to more ‘designed’ tonal enhancement. With the Tone and Saturation controls having such a profound effect on all three signals, the relationship between them can get very complicated, to beneficial or detrimental effect.

All MeldaProduction plugins include a plethora of settings, preferences and controls with which to customise their look and - more importantly - behaviour. In MBassador’s case, the popout Multiparameters and Modulators section offers countless ways in which to manipulate the Range, Tone and Saturation controls, opening up a surprisingly fruitful avenue of real-time creativity, while some of the buttons in the right-hand column contribute significantly to workflow.

The usefulness of the eight memory slots is obvious: each instantly snaps all controls to a stored configuration, making it easy to compare different setups with a click. The Limiter and Auto Gain Compensation options also prove indispensable, as MBassador can get quite unpredictable in terms of dynamics, with all those harmonics flying around. And finally, when dealing with stereo signals, the mid/side options in the Channel Mode are most welcome.

Within seconds of strapping MBassador over an ailing kick drum or bassline for the first time, you’ll wonder how you ever lived without it. Used with the care and judgment that plugins of this kind always require, it’s not only capable of rescuing previously unsalvageable bottom- heavy sounds, but also does a frequently miraculous job of improving already-solid ones, often by simply turning on the Bass module.

The ability to repitch each of the three signals could be fun, and a master output compressor wouldn’t hurt, but other than that, MBassador is another powerful and beautifully designed tool from Melda that you might well find yourself turning to in every project.