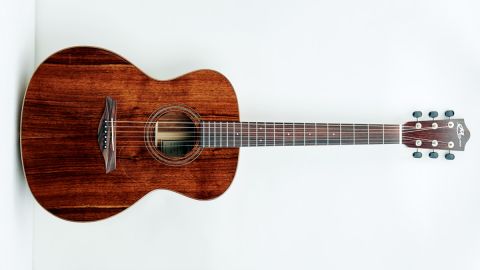 The clean build and clear bright projection from the M/30* make this brand one we’re looking forward to hearing from again.

There’s a lot in a name for us guitarists; expectations based on our past experiences mean we may well have certain preconceptions when we pick up a Tele, plug into a Marshall head or strum a Martin dreadnought.

But when we check out a new name without any of that, the slate is cleaner. Which is where we’re at when this Mayson acoustic arrives. And it’s always good to welcome a new brand, especially one that’s making ambitious claims.

The company’s Alex Wang claims to be taking the ‘NASA meets Stradivarius’ approach of acoustic flattop design “all the way back to the designing table, re-inventing each part of the acoustic guitar”. That’s certainly more than we were expecting for the price, but this is part of Mayson’s entry-level models in its Luthier series - further up the line you’ll find all-solid builds and electro options.

It’s a claim that’s somewhat overcooked here, but the M3/0*’s build is still different from most in a few ways: a solid ovangkol top with laminated ovangkol sides is a break from the norm - a bolted neck even more so. Even the gigbag here is distinctive - a dark metallic colour that’s well-padded.

Ovangkol is a sustainable wood we may see more of in entry-level models. After being primarily used for the higher end, it falls somewhere between its relative rosewood and koa on the tonal spectrum: rich with a broad range, full mids and clear, bright treble response. And that turns out to be a spot-on description in practice here.

The M3/0* is bright and clear and assertive, even weighty in the high-end. And though the bassier end isn’t boomy, it holds its own very well. The strong, defined and rounded character in the mids and high-end is actually a little reminiscent of a nylon-strung guitar, with the higher action and Mayson brand coated strings, and this guitar has a chunky, vintage- style neck that will appeal to classical players.

We don’t think it’s going to be favourable for smaller hands, especially with a slightly higher-than-usual action, but fingerstylists may well prefer the generous 57mm string spacing.

Mayson’s ‘Marquis’ Grand Auditorium-style shape is wider at the lower bout than average dreads at 400mm, but the ovangkol’s heavy figuring is what makes it really stand out from the pack, alongside its tonal character.

With the ongoing issues around importing some wood types, sustainable tonewoods are going to become much more of an issue in 2018, but in Mayson’s hands, ovangkol produces attractive and distinctive results to give players a wider choice in this price range. And the clean build and clear bright projection from the M/30* make this brand one we’re looking forward to hearing from again.