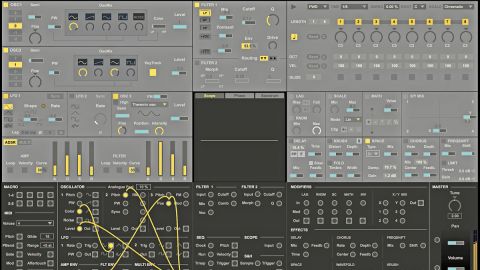 Pallas is a very interesting, flexible and well-designed synth, but it’s pushing up against the capabilities of its Max framework.

Pallas is a semimodular, analogue-modelling synth with eight voices and three oscillators. The first two oscillators offer standard analogue-style waves controlled via an oscillator mixer; the third, meanwhile, is a wavetable oscillator, with an extensive list of samples mostly sourced from classic hardware. This oscillator is capable of frequency modulation and can be retooled as an additional LFO.

These are joined by a pair of filters, one of which is capable of formant and comb filtering, and has a drive section, the other can morph between filter modes. There are then two ADSR envelopes and two multi-shape LFOs.

Beyond that, Pallas features a built-in step sequencer with up to 64-steps, capable of sending note or modulation messages. Finally, the synth engine is completed with six effects modules, covering delay, bitcrushing, reverb, chorus, a frequency shifter and a limiter.

Because Pallas is semimodular, its engine can be re-routed using the virtual patch panel in the lower portion of the interface. To make the most of this, it also features a quartet of routable, modular-style modifier effects offering randomisation, signal scaling, clipping and multiplying.

There’s also a routable X/Y controller and eight assignable macro controls for morphing and manipulation. In terms of both its sound and feature set, Pallas punches well above its humble origins and modest price point.

It does a convincing impression of a real analogue engine - helped by a neat Analogue Feel parameter, which introduces circuitry-like variations and drift. With the addition of the wavetable oscillator and effects modules, however, Pallas is particularly well suited to bubbling ambient sounds and glassy pads.

Unfortunately, as is true of other Max-based synths like Bengal or Dark Synth, Pallas often feels like it’s pushing at the boundaries of the platform it’s based on. It can occasionally get a little glitchy when running multiple instances or throwing lots of modulation at a patch.

Of course, being M4L-based also means that it’s only available to Ableton Suite owners, which is a shame as it’s an interesting instrument that complements Live’s sound palette well. Despite that, Pallas is a powerful and well-priced synth - if you can tolerate its hunger for CPU!