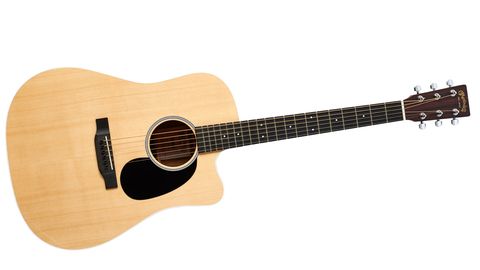 This guitar makes a very compelling case for branching out into new areas of timber and tone.

This has been the year when guitarists were forced to come to terms with the increasing scarcity of traditional tonewoods.

New CITES regulations placed stringent controls on the export of guitars with rosewood ’boards and bodies and even major names like Fender were forced to look for alternative woods for fingerboards. While the initial hue and cry may have died down a bit, it’s clear that a watershed point in guitar making has been reached. It means, among other things, that we can expect to see even more alternative woods being used as the industry tries to adapt.

But sustainability isn’t the only reason for using non-traditional tonewoods, especially in the acoustic market. In a packed marketplace, where many brands and models vie for our attention, unusual tonewoods can open the door to striking new visual and tonal possibilities. And that’s not lost on one of the biggest names in the market, which has championed the use of sustainable woods for some time now.

That said, as such things go, the construction of this guitar is relatively conservative: the dreadnought Martin DCRSG features mutenye back and sides and comes with solid Sitka spruce tops, a more traditional choice.

The DCRSG is part of a Road Series that boasts certified sustainable wood parts. Martin describes mutenye as an African tonewood similar to rosewood and ovangkol, lending the DCRSG what it calls a “beautiful even tone with good bass response and clear mids and trebles”. Again, a typical dreadnought all-rounder. So it’ll be interesting to find out how close to established tonal norms the DCRSG comes.

Interestingly, there’s a softness to the Martin’s mids, especially with single notes. And though its highs may not offer the bright attack some players used to rosewood want from a dreadnought - the action here is low enough to contribute to that - they do offer something else.

The highs instead lend an airy feel to chord work while the bottom end adds plenty of depth for that harmonious hi-fi spectrum players expect from a Martin. It’s a mellower take on higher-end shimmer. Rhythm work is where the Martin really shines, though the resonant lows from the body also lend welcome authority to bass notes in fingerstyle.

The DCRSG proves especially responsive to low volume playing with fingers or pick, and that in turn brings out a more sensitive playing approach - as well as being ideal for sneaking away for some late night practice.

Our previous experiences with both the Fishman Sonitone hints at how this guitar will sound plugged in - and the reality conforms pretty much with that hunch. The Sonitone has proved a very popular third party system for a number of brands, especially around the £500-£600 mark. It’s a solid performing piezo system and here feels more resonant and warm than it does on some other guitars we’ve played, but there’s still a compressed quality that means the DCRSG’s softer natural subtleties aren’t well represented in the higher end. But in some ways that’s a benefit for the band player who needs more presence in the mix - the trebles sound punchier through our acoustic combo and rolling off the system’s treble will ease you back to a rounder sound.

Piezo pickups often best suit the prominent mid-range of smaller-bodied models, but the Sonitone system still works well enough in this context. Though that can also be said of more reasonably-priced Martins - both the Dreadnought Junior and 00LX1AE feature the Sonitone and retail for under half the price of the DCRSG.

So how much difference do non-traditional tonewoods make here? The solid-wood Martin feels like softer and mellower vision of what a dreadnought can be than we expected - the solid mutenye making its presence felt primarily in the attractive and subtle detail of the higher end overtones.

It’s a shame that Martin has gone with the Sonitone pickup - it’s a decent system but it doesn’t deliver the detail we’d hope for here, especially at the price point. Niggles aside, though, this guitar makes a very compelling case for branching out into new areas of timber and tone.