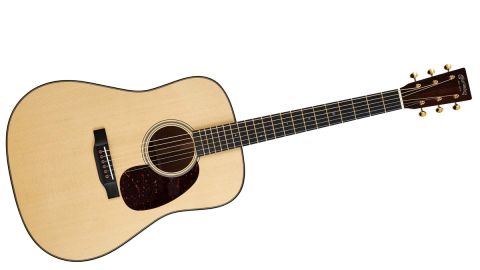 Martin’s mission to evolve its heritage by enhancing the range in the way we’ve seen here is to be applauded.

Last month we looked at a pair of new-for-2019 Martins, both a variation on the classic theme of established models.

The added frisson in the case of the aforementioned 000 14-fretters was the use of sinker mahogany, the 300-year-old timber adding additional zest to Martin’s renowned tonal spectrum. Here, we’re continuing our look at the celebrated acoustic manufacturer’s new catalogue with this Modern Deluxe model. And the theme of enhancing the range with a few well-chosen refinements - many of which have trickled down from Custom Shop instruments - continues apace.

It would be easy to split our look into three sections of classic, modern and deluxe. As far as the classic section is concerned, this model has been in Martin’s inventory since the early 1900s. The D-18 entered the catalogue in the 1930s, with the 14-fret incarnation that we see here being established in 1934. Understandably, as far as body woods are concerned, it has gone through a few changes over the years. But it is undoubtedly classic a Martin, right down to the dovetail neck joint and the protein glue that’s used in the construction.

Moving on to the modern appointments here and first we find titanium truss rods - more hard-wearing than steel but most importantly much lighter. Martin claims the use of titanium reduces the weight of the truss rod by around 64 per cent when compared with its steel counterpart. The reduction in weight overall is certainly one of the first things you notice when you pick up this instrument.

Second in line and adding to the modern features are composite carbon-fibre bridge plates, which are essentially ‘sandwiches’ comprising two outer layers of carbon fibre with a filling of Adirondack spruce. Martin’s vice president, Fred Greene, tells us that carbon fibre by itself didn’t give the tonal properties they were looking for, but when combined with the spruce layer they hit upon the perfect combination of strength and tonal enhancement. What’s more, the new bridge plate is responsible for another drop in weight, but, tonally speaking, has added sparkle to the guitar’s sound and a slight increase in volume, too. It’s also more durable and extremely strong.

Another modern touch is the inclusion of Liquidmetal bridge pins. We realise that the jury is still out with regards to what different materials offer as far as bridge pins are concerned. Some luthiers claim it makes no difference at all seeing they
are beyond the string saddle and therefore don’t have a role in the tone-shaping stakes. Others insist that experimentation in this vicinity can practically turn lead into gold, tonally speaking.

A quick look on the web will confirm that companies all over the net are queueing up to sell you fossilised mammoth bone, brass or whatever, adding that the difference in sound is worth the sometimes eye-watering price. We’re sitting on the fence here as it’s difficult to prove either way. Bridge pin changes often accompany a new set of strings and so the uplift in brightness and sustain might easily eclipse whatever it is that the pins are providing. However, Liquidmetal is a space-age alloy that, simply put, doesn’t absorb vibration in the way that other materials do, rather it reflects it. So using bridge pins made from Liquidmetal theoretically puts any vibration found at this point straight back into the guitar.

The guys at Martin found that using them increased an instrument’s volume by three to five decibels. We’ll see what our ears tell us on this score a little later on.

Last in line for the modern touches is Martin’s VTS system of heat-treating a guitar’s top and bracing to give some of the timbral qualities of vintage instruments, as well as offering an antique visual aesthetic at the same time.

So what about the deluxe refinements? These are obvious the minute you open the case. First of all, there’s the pearl logo on the headstock - a luxurious green abalone sheen that whispers class from the outset. Then there are the gold-plated Waverly tuners that add to the overall visual appeal of the guitar.

Less noticeable, perhaps, is the East Indian rosewood wood binding. Finally, there are the gold frets - not real gold, of course, but an alloy with a visible copper content that gives a classy golden appearance, matching the tuners and living up to Martin’s claim for the Modern Deluxe series that ‘Sophistication Meets Performance’. But the frets haven’t received the Midas touch for purely cosmetic purposes; the alloy in use is much stronger and longer lasting than steel and pitched just a little way beneath stainless steel for wear-resistance.

We’ve played many variations on the D-18 before, from stock models right up to Custom Shop works of art. So we had a sort of benchmark in mind for this guitar before we even played a note on it. We’ve already mentioned the weight reduction: it is much lighter than many instruments bearing the same lineage, and the deluxe appointments speak for themselves - this guitar looks fabulous. But what about the sound?

To begin with it would seem Martin’s claim that the Modern Deluxe range enjoys a step up as far as volume is concerned is fully justifiable. This guitar seems louder than models that have come our way in the past. Whether that’s due to the carbon-fibre bridge plates, the Liquidmetal bridge pins or a combination of both is impossible to pinpoint, given that we’re not in the business of laboratory type testing. Let’s just say, there’s volume - and projection - to spare.

The D-18 is no slouch when it comes down to tone. That accustomed lower midrange clout is there in spades, but our ears detect a new sophistication: its sound is elegant, without any of the tendency towards muddiness sometimes present in a dreadnought. The D-18’s role as the singer-songwriter’s best friend continues apace - it’s just that this one has gone to a good finishing school.

We tested both the D-28 in quite a large room, and one that has a tendency to dissipate the bass end of an acoustic guitar. It held its own admirably, the proportion of bass to treble remaining constant and very sensitive to touch. Want more? Pluck louder. Simple.

Martin’s mission to evolve its heritage by enhancing the range in the way we’ve seen here is to be applauded. We can imagine that all the new-fangled ideas that are going on with the Modern Deluxes - both seen and unseen –-may be in conflict with comfort-zone sensibilities of the traditionalists, but to those fine gentlefolk we would wholeheartedly recommend auditioning one. The difference you find here is real with additional volume, enhanced projection, greater sustain - and that’s on top of the renowned Martin tone. You really can’t go wrong.