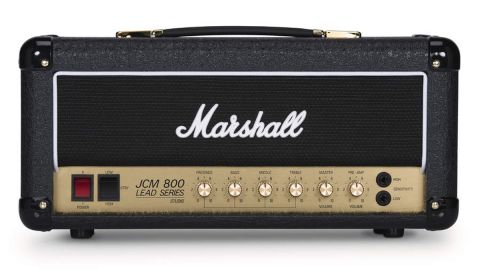 A faithful downsizing of an iconic British head, with a number of practical improvements.

If you always wanted to own a classic Marshall stack, but were put off by the sheer power and weight, your prayers have been answered by the folk at Marshall, which recently unveiled the Studio range, featuring three scaled-down 20-watt versions of some of Marshall’s most famous designs.

The 1959 Super Lead is recreated as the Studio Vintage, the Silver Jubilee becomes the Studio Jubilee and the mighty JCM800 is the inspiration behind the amp we’re looking at here, the Studio Classic.

Each design is available as a head with matching 2x12 or 1x12 cabs, or as a combo. Visually, the Studio Classic head is roughly three-quarters the size of the original 2203, with a full-width gold control panel, black cloth grill, white piping and a re-sized Marshall logo.

Inside the tough ply cabinet, there’s a steel tray chassis, which supports two relatively small transformers and a large high-quality PCB that holds most of the electronics, including the valve sockets. Smaller boards support the knobs, input jacks and rear panel connectors, with wiring bundles terminated by Molex connectors. It’s typically Marshall: neat, businesslike and built to handle the rough and tumble of rock ’n’ roll.

The controls are self-explanatory: a pair of high and low sensitivity inputs feed a simple but effective preamp design with knobs for preamp and master volume, bass, mid, treble and presence.

The standby switch has two output options: full power is around 20 watts while the low setting tames the Studio down to around 5 watts. On the rear panel, five speaker outlets handle any cabinet connection with a simple series effects loop that can be switched in or out of the circuit. An unbalanced DI output can be used to feed a desk for live or studio use.

As you’d hope, the Studio Classic sounds just like a proper JCM800, with (slightly) more polite volume levels. Like the original, the treble response is on the bright side and the preamp’s medium gain is best suited to beefy humbuckers in a mahogany- bodied guitar, like a Les Paul. Use single coils and you’ll find yourself turning off most of the treble and presence to get a balanced tone, losing precious gain in the process.

At higher volume settings, the Studio Classic’s two EL34s begin to stamp their authority on the sound, thickening things up to produce the JCM800 midrange grunt for which these amps are world-famous. Even using the lower power setting, the Studio Classic is seriously loud - after all, it is a Marshall.

Plugged into the matching 2x12 vertical cabinet, the 20-watt full power rating is more than enough for most small to medium gigs, while the 5-watt option is ideal for studio and home use - providing you have understanding neighbours.

Using an SG loaded with a Seymour Duncan Jeff Beck humbucker, we were absolutely delighted to find all of our favourites from the JCM800’s golden era of the early 1980s sounded totally authentic, making the Studio Classic a real blast to play.

Effects pedallers aren’t forgotten - as well as the impressively transparent series effects loop there is the often-overlooked low sensitivity input jack, which offers a ton of headroom and a spanky, fast response that’s an ideal platform for all kinds of pedals, with no appreciable loss of volume. And unlike many originals, this version of the JCM800 has practically zero hum and hiss levels, making it very usable in the studio.

We think Marshall’s new Studio range could be a runaway success - thanks mostly to the smaller transformers, the Studio Classic head is very portable at just under 10kg, while the sound is definitely up where it belongs in the heavyweight league.

The original 2203 may not have been Marshall’s most versatile amp, but the simple no-frills design and aggressive bellow inspired a generation of world-class players and some of the greatest rock tracks of all time were played through it.

If you want to rekindle the 1980s magic without the weight and power of the full fat 100-watt reissue, the Studio Classic captures all of the magic of the original. While it isn’t cheap, this head is made in the UK and it’s certainly been built to last.