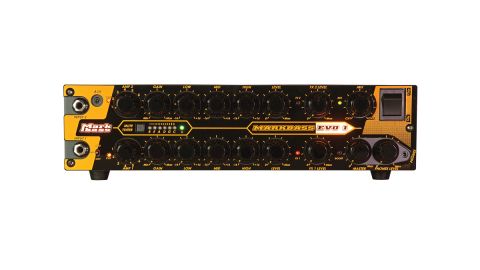 The EVO 1 could well be the amp that takes bass modelling into the mainstream.

Markbass has never been a company to rest on its laurels.

It always seems willing to push the boundaries of design and technology, and when the Markbass Multiamp was released in 2013 we loved it.

We concluded that many players would love the power, versatility and functions of the Multiamp, but they might not be so keen on the time spent squinting into the small blue LED screen and twiddling all those knobs and buttons to find a sound.

Bearing all that in mind, this new EVO 1 head could be just what many players are looking for; a powerful modelling-type amp with all the versatility of the Multiamp - but also one that’s really straightforward to use.

Part of the reason that the EVO 1 seems less daunting is the familiar two-channel layout. There’s no screen, either. In fact you could just take it out of its box, plonk it on top of your speakers, cable up and dial in a great bass sound featuring your favourite amp head and effect within seconds. This is exactly what we did.

Here’s what’s on offer. Next to the ‘Aux In’ for plugging in your laptop or phone is a selector switch, allowing you to choose one of six pre-set amp models. A glance through the manual reveals that these have names like ‘T-Green90’ and ‘Sunny US’.

For bass geeks like us, these are fairly easy to decipher - Trace Elliot and Sunn in these cases - although oddly the amps they represent are listed in the manual anyway, which makes you wonder why Markbass bothers with the ‘cryptic’ names.

Anyway, these are incredibly accurate representations of the original amps’ sounds: it’s great fun switching between them and comparing sounds on the fly. Once you’ve chosen your amp for Channel 1, you can move on to setting the gain and the EQ. This is fairly simple as you only have three bands, Low, Mid and High, but they have well-chosen centres and a powerful plus or minus 16db of gain.

After the EQ is the Level control followed by the Effects level for Channel 1, with its own status LED. Lastly is the Master Volume and a headphone jack with its own volume control - most welcome.

Channel 2 pretty much replicates channel one. There’s the same six-way amp model selector - albeit with six different amp models - the same gain, EQ and level controls for volume and FX. Also on the top row we have a ‘mix’ control that allows you to blend your two chosen amps, and there’s a micro-toggle switch for choosing between either or both channels and a Tuner button which mutes your signal when switched in.

On the back there are two separate balanced line outputs and two effects loops, as well as Speakon/jack outputs and the USB and MIDI in port for the optional footswitch.

In use, the EVO 1 couldn’t be easier; just select your amp, adjust your EQ and you’re good to go. Out of the box you have access to 12 different amp models, but only two options for effects.

Channel 1 has a lovely spacey chorus, while Channel 2 has a meaty octave. Both are very usable, but adjustable only in terms of the amount of effect added to your sound by the dedicated FX level control for each channel.

Two inputs mean you could have two basses running through the amp simultaneously, each with its own EQ and FX. However, for us the real benefit of this setup is being able to choose two different amp and effect combinations and then blending the two as you wish.

Imagine a smoothly overdriven Bassman model paired with a punchy, clean amp like the Trace, with a touch of compressor - great stuff! So far, so easy, but it would be a shame not to take advantage of all the other effects and amp models available when you connect the EVO 1 to your computer and use the dedicated software. Once done, you can really start to see the potential of this amp.

By choosing from simple dropdown menus, you can select from dozens of different amp models and apply any of six different effects. As well as the Octave and Chorus already mentioned, there’s a compressor, envelope filter, reverb and delay, all with parameters you can tweak to get them sounding just as you wish.

We loved this amp. It’s a real gigging tool, and it’s so easy to edit your sound on the go. Although it ‘only’ pushes out about 300 watts into an 8 ohm cab, the MPT (Mark Propriety Technology) class D power amp design gives plenty of headroom and more clean volume than you’ll probably ever need.