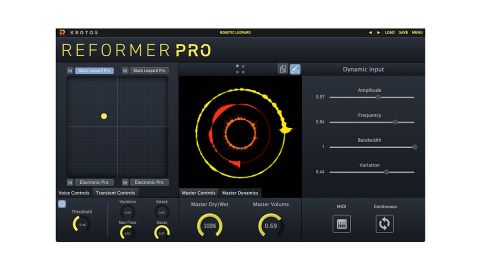 Reformer Pro is a tricky one to quantify for musicians, given the price, but it’s utterly essential for sound designers.

An effect plugin (VST/AU/AAX) aimed primarily at sound designers and foley artists, Reformer Pro was conceived as a replacement for the static sample libraries traditionally used by such folk. It enables the user to ‘perform’ all those animal noises, footsteps, gunshots, knife cuts, etc, in real time, rather than manually editing them into shape from prefab starting samples.

It does this by running “various forms of real- time analysis on the [input] signal... to produce a composite sound”. We take that to mean analysis of transient content, volume levels and frequency spectra, the results of which are then deployed as a control signal for the playback, mixing and layering of up to four blendable sets of loaded samples. In terms of fundamental principles, it’s very much along the same line as a multisampled instrument, but triggered by audio input rather than MIDI (although MIDI is an option, too, as we’ll see), and with far more going on in the background than simply the crossfading between adjacent samples as the input changes. Fire up the included Black Leopard library, for example, and growl into the mic to hear the ‘multisampled’ voice of said beast perfectly tracking the transients, envelope, intensity, and general shape and feel of your input. Or scrunch up a piece of paper and replace it with the nail-biting squeaks and scrapes of the Polystyrene library. The result is invariably an original, dynamic and, ultimately, believable sound.

Although you can load any samples you like into Reformer Pro using the included Analysis Tool application (see Analyse this), Krotos offer a wide range of pre-made multisample libraries – more than 120 at the time of writing – covering everything from animals, creaks and impacts to machines, surfaces and textures, and ranging in price from £12 to £70, with bundles from £47 to £1200 for the whole lot. You get four freebies with the base software: Black Leopard Pro, Electronic Pro, Fruit Squash Pro and Leather Foley Pro. No, it’s not the most generous of throw-ins, but Reformer Pro is clearly intended first and foremost for professional sound designers (you’ve seen the price, right?) who will already have their own extensive collections of samples to draw on as source material.

You can view and audition the samples in the selected library in the Extended Library View, and instruct the algorithm to ignore individual samples, taking them out of contention for triggering. Surprisingly, though, no indication is given in the GUI as to which sample is playing back at any given point in actual usage.

Key to the successful adoption of Reformer Pro by professional sound designers, no doubt, is the ease with which they can import their existing, trusted sample sets and have them ‘Reformed’ for real-time play, just like the prefab libraries sold by Krotos. Fortunately, the whole process couldn’t be any simpler, and the results are generally excellent.

Included with the plugin, Reformer Analysis Tool is a standalone converter for adding folders of samples to the Reformer Pro browser as libraries. You can specify any number of sample rates between 44.1 and 192kHz to convert to simultaneously, and give your library a name and thumbnail image if required. The app can be launched from the plugin, and the conversion takes no time at all. Indeed, the only speed bump is having to refresh the plugin to register the new library!

The Analysis Tool manual describes various stipulations and recommendations for effective conversion (samples must be longer than one second, original mic positioning should be consistent, dynamic range should be broad, etc), but the app is very tolerant.

The main interface puts the XY pad on the left, with a library loaded into each voice quadrant from a simple, searchable browser. Move the puck to mix the voices, with an equal balance of all four at the centre point.

Each voice has its own set of controls, including Volume, Playback Speed (also affecting pitch) and input Response (from quite languid to instantaneous); and the optional Transient Engine separates the transient peak out from the rest of the signal for discrete triggering, tweaking and balancing. After all that, the Master section includes a compressor (complete with Attack, Release and Dry/Wet mix controls), a limiter and Dry/Wet mix knob.

Clicking the ‘jack plug’ button puts Reformer Pro into Dynamic Input mode, where triggering is controlled in fine detail by automating four sliders in the host DAW. The Amplitude slider triggers playback at the volume level specified when moved, while Frequency and Bandwidth narrow the library selection down to samples within a particular spectral range, and Variation causes the algorithm to ‘roam’ from the selection prescribed by the other three sliders, for the avoidance of repetition. Activating the Continuous button outputs a constant triggering signal, and lighting up the MIDI button opens a MIDI input with the Amplitude.

Reformer Pro is an incredibly productive system for sound design and foley, and we can’t recommend it highly enough to anyone working in those areas. It confidently delivers on its promise of bringing your (and its own) samples spectacularly to life via live audio, MIDI or pre- recorded input, and is clearly destined to become an industry standard tool in the post production arena.

From a musician’s perspective, though, the story isn’t quite so straightforward. Reformer Pro is great for unpredictably replacing or underlaying drum and percussion sounds (automating the XY pad to morph a textural layer triggered by a drum loop is big fun), and creating wild glitches and – in Continuous mode – drones. But, as the pitch of your incoming audio signal isn’t recognised, the plugin is less versatile for melodic use. And, alas, it only outputs in mono.

Reformer Pro certainly has a lot going for it as an experimental, abstract production tool, then, but whether or not that’s worth the costly outlay is something that only you – with the help of the cut-down free version, Reformer – will be able to decide.