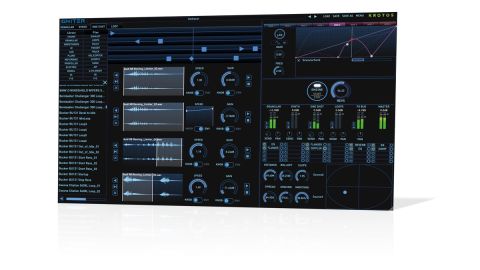 If you make vehicle and/or engine noises as part of your job, you need Igniter.

The latest in Scottish developer Krotos Audio’s series of sound design plugins is geared up for the creation of real-world and ‘imagined’ vehicle sounds - cars, trucks, motorbikes, helicopters and planes - using a combination of granular and conventional sample playback, and a five-oscillator synth.

Igniter is available in two versions: Igniter, which we’re reviewing here, incorporating 6GB of samples, and Igniter Full Tank, which adds another 70GB of samples (“onboard recordings, ramps, static rev bands, Foley sounds, skids and slides”) for those who crave the ultimate in sonic detailing - and don’t mind paying £881 to get it.

Igniter loads as a virtual instrument (VST/AU/ AAX), and all you have to do to get started is load a preset (see The cars are the stars), hit the Engine Start/Stop button and manipulate/ automate the Revs knob. This ties into Igniter’s eight modulators and serves as a master macro control, adjusting multiple assigned parameters to ‘accelerate’ and/or otherwise intensify the sound of the vehicle.

That may well be all you need to get your onscreen vehicle sounding the part, but Igniter is bursting with customisation options nonetheless, in the shape of four ‘generators’, and a comprehensive array of modulation, mixing and effects controls.

The Granular generator lets you balance sample-based Engine and Exhaust sounds imported from the library in any combination, set the engine to Manual or Automatic, and accelerate/decelerate. The Synth generator facilitates the addition of an overtly electronic layer, its five oscillators each able to blend two waveforms, and apply FM, AM and vibrato.

The cars are the stars

Igniter ships with around 200 presets, each one configuring the whole plugin for a wide range of ready-to-go vehicles and engines.

While the helicopter and plane presets have all been constructed entirely using sets of samples in the Loop engine (and not to their detriment, we might add - they sound fantastic), the wheeled options make full use of the more flexible Granular engine, combining complex Engine and Exhaust sounds in a proprietary ‘package’ format that allows for a great deal of tweakability, whether deployed for realistic emulation or sci-fi sound design.

The 14 Engine/Exhaust packages in the library are enough to get any petrol head drooling. The Porsche Carrera, Audi R8, Aston Martin Rapide and Ferrari 348 top the list, followed by the rather more mundane Subaru Impreza, Honda Civic and Toyota Chaser, a handful of trucks and SUVs, a U650M tractor, and a Harley Davidson hog.

In the One Shot tab, four samples can be dragged in (from the library or elsewhere) and triggered in various ways, including via an onboard sequencer of sorts, for ‘sweeteners’, such as skids, ignition sounds, horns and so on. In the Loops generator, up to four looping and crossfaded samples (again, internal or external) are arranged on a timeline and swept through with the Revs knob, providing road noise, windscreen wipers and other continuous layers, as well as Igniter’s aircraft sounds.

The four generators meet in the mixer, where five insert effects can be loaded onto each, as well as a send bus and the Master out, from a list that includes EQ, Compressor, Convolution Reverb and the awesome Doppler. The system is brought to life with the aforementioned eight Modulators, which work as LFOs or envelopes, applied on the fly using the Revs control.

Pedal to the metal

Igniter is yet another triumph for Krotos. The effort that’s gone into building the sample library is clearly immense, and the level of control granted over it is mindblowing. The synthesis engine works well, too, whether you just need to add a bit of sub-bass rumble, or a fictitious layer of noise; and the effects sound wicked and offer plenty of customisation.

While there’s nothing here that musicians should feel any compulsion to drop over 500 quid on, for cinematic and game sound designers, Igniter enables the conjuration of a literally infinite range of utterly convincing real-world and sci-fi vehicle sounds within a powerful, flexible but approachable interface. Absolutely amazing.