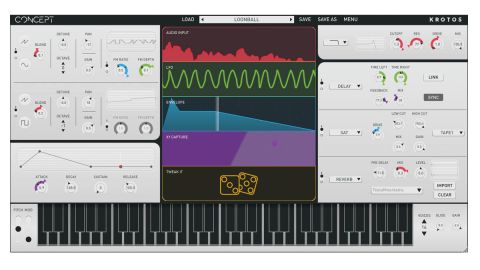 An inspired addition to the Krotos catalogue, Concept is a modernist breath of fresh air with a few fixable flaws.

Thus far, however, their plugins – including Reformer Pro (Foley effects, animal noises, etc), Weaponiser (gunfire and associated noises) and Igniter (real and sci-fi vehicles and engines) – have been largely irrelevant to musicians, so it’s with no small degree of excitement that we fire up Krotos’ first-ever softsynth: a two-oscillator virtual analogue going by the name Concept (VST/AU/AAX).

Concept’s interface makes it immediately apparent that this is an instrument that wants to be your friend, no matter what your level of experience.

Apart from the fold-out modulation controls, every parameter (two oscillators, amplitude envelope, filter and effects) is accessed from the front panel.

While any prospective user will, naturally, need to wrap their head around the basics of synthesis to get anywhere, Concept is as unintimidating as we can imagine a not-dumbed-down synth being.

Each oscillator outputs a user-adjustable mix of two waveforms (sine, triangle, saw up, saw down, square, noise), and FM Ratio and Depth knobs apply frequency modulation (FM) via a separate sine wave oscillator, for metallic tones, hard basses and the like.

After shaping with the ADSR amplitude envelope, the oscillators feed into a simple resonant ladder filter that only offers high- and low-pass modes, and 24dB/octave roll-off, but can be overdriven and variably mixed with the input signal.

Each source slot can be loaded with any one of five signal generating modules, and almost every parameter can be modulated, including those of the effects and the modulators themselves.

The LFO (bipolar only) and Envelope modules present no surprises, the former outputting the same six waves as the oscillators, and running at up to 30Hz unsynced, or 8/1 to 1/64 synced; the latter an ADSR with the Attack, Decay and Release times maxing out at 20s each.

The Audio Input module is very ‘Krotos’, enabling the amplitude or pitch of an incoming audio signal on one of four sidechain inputs to be exploited as a modulation source.

The Smoothing control is used to reduce glitchiness with fast moving signals, and pitch modulation can be constrained to a specific frequency or note range. It’s powerful stuff, opening up a world of rhythmic and tonal control.

The XY Capture module is an XY controller into which you can record a looping or one-shot movement path up to eight bars long (or as long as you like when not synced to host) for use as a bipolar modulation signal.

The speed of automatic playback is adjustable, and in manual mode, a slider (host-automatable but, disappointingly, not internally assignable as a modulation target) is used to fly backwards and forwards through the path as you see fit.

The Mod Wheel module simply points MIDI CC1 at its targets, with the input/output mapping shaped using an editable curve.

Each source’s targets are listed in its panel, with modulation amount sliders and mute buttons for each; and adjustable mod amount collars also appear around the controls in the front panel, providing an at-a-glance assignment overview.

There’s no limit to the number of parameters a modulator can be routed to, but – ouch! – each parameter can only receive one source input at a time, so you can hook an LFO or an envelope into the filter, say, but not both. This is a real issue for deep programming, and we can only hope it gets addressed in an update.

Finally, Concept’s effects rack gives you three slots to fill with any combination of ten processing modules. These include EQ, Compressor, Delay, Saturation, Ring Mod, Filter (a repeat of the main filter) and a convolution reverb stuffed with factory impulse responses and able to import external WAVs.

Krotos Audio have developed a fine synth here, and there is a lot to love in Concept’s relaxed, intuitive GUI, solid ‘analogue’ sound and nifty modulation setup.

And while the XY Capture and Audio Input modules are the more obvious headline makers –facilitating artful automation, creative experimentalism and dynamic ‘fusing’ with other mix elements – the rest of the components come together pretty seamlessly around them.

Concept has not made a flawless debut, though. That one-mod-per-parameter limit is not great, and we don’t massively enjoy having to pop open a display every time we just want to tweak an LFO or envelope – surely the modulators could be integrated into the main interface without compromising their excellent visualisers.

We’d also like to see the filter become more versatile, and the LFO and XY Capture given a unipolar mode and Tweak functionality. It’s potential to be realised.

But those wishes aside, as we say, Krotos Audio have built a productive, fun instrument that delivers the goods across the gamut of analogue instrumentation, but is particularly effective and individualistic as a source of contextually responsive pads, FX and textures.

MusicRadar verdict: An inspired addition to the Krotos catalogue, Concept is a modernist breath of fresh air with a few fixable flaws.

"Once you’ve grasped its colour-coding and modulation potential, Concept can be extraordinarily addictive to use. Building snarling, wonky and pulsing basslines from what started life as a static held note via a beat loop in your track, while separately automating those same parameters from tempo-synced LFOs is tremendously fun."
MusicTech