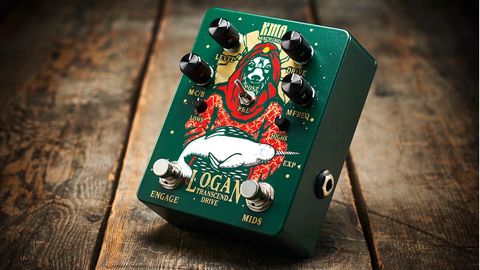 Guitars are a midrange instrument and nowhere on the frequency spectrum will you find quite the same effect on the voice and flavour of a distortion than in the midrange.

That is where the action is – even when the mids are hollowed out and scooped. Take control of the midrange and you can take control of your gain stage; and this seems to be the thinking behind KMA Machines Logan Transcend Drive.

On the cool silk-screened enclosure you'll find a narwhale chilling under a confederacy of knobs, with the ubiquitous Level and Drive controls sharing space with Mid Cut/Boost and Mid Frequency, and two smaller knobs capable of adjusting Lows and Highs by up to 15dB. There is a switch for positioning your mids EQ before or after the gain stage.

These mids are footswitchable. And the Mid Cut/Boost and Mid Frequency offers  parametric control. Mid Frequency lets you set your mids anywhere between 100 Hz and 2.5 kHz, while the Mid Cut/Boost can cut or boost that midrange frequency by 12dB either way. There is even an expression pedal input so you can adjust the mids on the fly, turning the Logan Transcend Drive into a throaty wah-cum-dynamic phaser. It's pretty neat.

Under the hood there are trim pots to set the bandwidth (Q) of the Mid-EQ and to blend your overdriven signal with your clean signal – the latter a very useful feature if using this with vocals, keys or synths.

Being able to place the mid-EQ before or after the gain stage is pretty darn cool. If you are looking to give a certain frequency a little more juice and saturation, the "Pre" position really arrows in on those mids. Allied to the footswitchable mids, this is like having two pedals in one at any given time.

Put your mids after the gain stage brings forth a little more control on the EQ side of things, and is ideal for when you're looking to dial in a little more heat for a solo. That you can attach an expression pedal and effectively use the Logan as an auxiliary wah lends weight to KMA Machines' claim that this is a one-stop solution for overdrive. Maybe that's what they mean by "transcend".

• Fender Santa Ana Overdrive
The Santa Ana is an FET-based overdrive pedal with two voicings and an extra footswitch for added boost, and has versatile EQ with a set of four knobs (Bass, Middle, Treble, Presence) reminiscent of a Fender amp front panel.

• DOD Boneshaker
Distortion rather than overdrive and with circuitry specifically designed for extended-range guitars, the Boneshaker offers a flexible three-band semi-parametric EQ, so you can tweak frequency and level in the low, mid and high ranges.

• Orange Bax Bangeetar
A “pre-EQ pedal” and loosely based on the gain structure of the Rockerverb amp, this pedal has knobs for bass and treble plus a fully-parametric Baxandall circuit for midrange with knobs for cut/boost, Q (bandwidth) and frequency.


Play around with the internal trim pot and you can adjust the bandwidth and the sweep of this wah. It really is a bonus effect. The other "blend" trimpot is more of a set and forget feature, and one we would imagine is more use to bassists or keyboardists than guitarists, those who want a more subtle degree of dirt.

As for the dirt? Well it's dynamic, it's responsive, and with all that midrange control it has something for everyone in there. You could happily run this as a clean boost that's capable of adding a little punch for solos to cut through, or crank it for hotter crunch tones. Or just go all in with a Schenker-esque cocked wah tone.

Whatever floats your boat. Come ye, come all.... Blues players, classic rock riffers, dealers of old-school heavy metal steel riffs and more will find good reason to add one to their 'boards and dial M for midrange.

A nicely responsive drive that excels in the role of adding dirt to clean amp. The precise sculpting of dirt tone combined with practical performance features confers a flexibility that really does transcend the standard drive format.
Guitarist Magazine