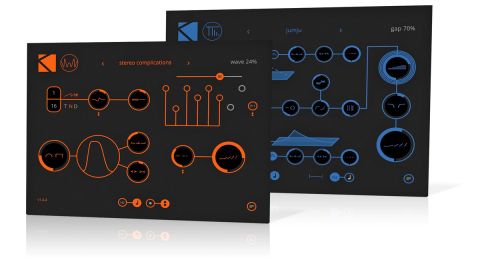 The first two releases in the Phoenix Series, WOV and TTAP mark the move for Max For Live developer K-Devices’ into self-contained plugin effects for Mac and PC.

An amplitude modulator and a delay, respectively, we’re reviewing them together here as the WOV+TTAP bundle, but they’re also available separately for €59 each.

WOV is essentially a gate sequencer, cycling through anywhere between two and eight steps at synced or unsynced rates from 1/128 to 16/1 with triplet and dotted options, or 0.1 to 30Hz. The relative level of each step is adjusted using its Accent slider, and the shape of the steps is defined by the Wave, Peak and Warp controls, which between them provide plenty of curving/ cornering, skewing, widening/narrowing and positional offset.

Interestingly, the Response control dials in an envelope follower for modulating the Rate with input amplitude; and a couple of randomising elements up the interest even further - see Random fandom. Switching the Stereo Mode to, er, two dots enables the Right Channel Offset function - which applies a one-step delay to the Accent sequence in the right channel when activated - and separates out the left/right processing in the Response and Silence circuits for a wider sound.

Although it doesn’t feel particularly intrinsic to their design, randomisation plays a role in both effects.

With WOV, it’s brought into play using the Variation and Silence knobs. Variation specifies the percentage chance of any sequencer step being either half (anticlockwise) or double (clockwise) the prescribed length; meanwhile, raising Silence increases the chance of any given step being silenced from zero to 100%.

TTAP allows for a touch of chaos as well with its Repeat and Spread controls. Spread simply places each delay tap randomly within the stereo panorama, with its percentage value defining maximum distance deviation from the source signal position. Repeat establishes the likelihood of each delay buffer repeating rather than overwriting itself with the input signal, throwing up crazy results when automated, and effectively freezing the buffer when cranked up to 100%.

TTAP works like a dual tape delay, with adjustable delay time for the first buffer or ‘tape’ (Time) and continuous offset of the second buffer from the first (Section and Gap); a Balance control for mixing them; and independent Reverse switches and shapeable amp envelopes for each, the last allowing attacks to be softened and interesting textural curves to be created. The Feedback control works as expected, and the bipolar Cut knob sweeps a low-pass filter anticlockwise from centre, or a high-pass clockwise. LFO-modulatable pitchbend can be applied to the delays, too, with the bend length and LFO rate determined by the Section time.

Our only significant complaints are with the visuals. The flat, minimalist styling of both plugins’ interfaces looks good, but having to toggle them between showing parameter names or iconography is pointless - why not just have both at once? Similarly, parameter values aren’t displayed on the controls - you only ever get the value of the last operated knob or slider in the top right corner. There’s also no animation in WOV’s sequencer, which remains unnervingly static, giving no indication as to progression.

It all looks very sexy, but ease-of-use and accessibility have certainly taken a back seat to graphic design here; and while it isn’t a showstopping issue, with no bearing on functionality and sound it does detract from the ‘finish’ somewhat, and certainly won’t be helpful for inexperienced producers. Nonetheless, for creatively inspiring gating and delay, K-Device’s artful plugins make for an impressive pair.