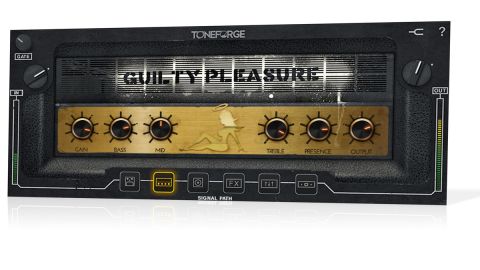 It might be a one-trick pony, but if you’re after classic high-gain amp tones, Guilty Pleasure comes cheap and sounds great.

Joey Sturgis Tones has built an enviable reputation for delivering high quality focused but affordable plugins, and given Joey’s own history playing and producing metalcore and heavy rock, these tools often dovetail nicely into those specific genres.

All but the Magic module have editable parameters, and the six are accessed by clicking on the relevant icon at the bottom. Clicking on the Signal Flow button reveals all seven modules, allowing you to bypass the Magic module should you wish. Although they don’t specify what this sorcerous processor does, shown on a frequency analyser it cuts the low mids, and boosts low and high frequencies, achieving a more polished and mix-ready sound. In the majority of cases, we found that things sounded better with it switched on.

Guilty Pleasure launches with all modules active, but in reality just the Amp, Cab, Magic and Overdrive are actually doing anything. This delivers the plugin’s main sound, which you can then enhance with the pedal effects and the output limiter. Switching out the Overdrive and Magic processors reveals the core amplifier tone, which is surprisingly warm, even at high Gain settings.

Clean tones are also possible (very low Gain and high Output), and the tone controls (Bass, Mid, Treble and Presence) provide further shaping. It’s obvious, though, as you turn up the Gain and the crunch kicks in, that this is what Guilty Pleasure is really for.

In the Pedal page you get four options: one screamer-style Overdrive before the Amp, and three effects pedals (Delay, Wah and Reverb) after the Cab. The Overdrive works well combined with cleaner Amp settings, or can push existing overdriven tones over the edge. Its Tone settings can help brighten the fundamentally warm Amp sound.

Overall, our favourite Effects pedal is the Reverb, with three suitably grungy reverbs joined by a rather excellent Reverse setting, which adds a breathing ethereal effect to chunky riffing when used in moderation. Adjustable parameters are kept simple (Blend and Amount) for ease of use.

You get two 4x12 cabinet options: a scooped modern-sounding Orange Custom and a warmer Mesa, with a choice of four mics (Condenser, 421, 57 and 57 off-axis). There’s no mic position adjustment, which is disappointing, but the eight available cabinet sounds are very different, and external impulse responses can be imported, which is a nice touch.

The plugin’s EQ is a five-band model, with the high and low bands switching between filter and shelving duties. All five bands have adjustable bandwidth and span the full frequency range (20Hz to 20kHz), so there’s loads of flexibility to further sculpt your tone. Rounding things off is the Limiter, which has a pretty snappy response and also automatic gain make up, so although the controls are simple (Threshold and Output), that Output attenuator really does come in handy.

Rather surprisingly, it also has no integrated patch library and no standalone version, so it’s clearly aimed at mixing rather than playing duties. Even so, Guilty Pleasure delivers plenty of solid tone, good shaping extras and is quick and easy to use. If you’re specifically after that classic high-gain amp sound, suitably tailored and ready for action, this is a great option.