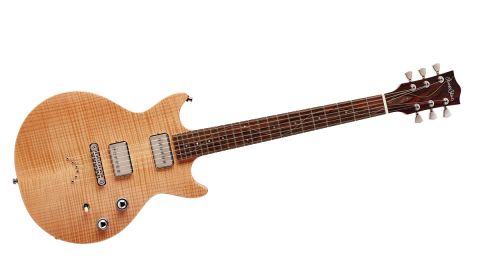 A guitar and a maker to take notice of.

Unless you’re a follower of small-number UK guitar makers you might not have heard of James Collins.

Based in East Sussex, James has been building his own designs since 2015 but started doing repairs in 2007 after returning from the USA where he studied at the Galloup School of Lutherie in Michigan.

The current James Collins range features four models with mahogany, set-neck construction and a choice of either flat-top, single pickup (the GTA), or carved-top dual-humbucker versions like the GT. The latest, as here, is the GTB.

The symmetrical double-cutaway outline recalls the UK’s longest running production maker, Gordon Smith, and as with the original John Smith design, the GTB takes the Les Paul’s treble cutaway half and mirrors it on the bass side.

“When I was studying,” says James, “I came across various 50s Juniors and later Melody Makers and I loved them. The first 50s Les Paul Junior I had in, I couldn’t believe it: I was blown away. With my own design I like the symmetry of the horns - plus it means we can do left-handers no problem.”

But unlike those classic all-mahogany Juniors, while the GTB retains a set-neck slab-style construction it adds a book- matched flat maple top, approximately 6mm thick, over the one-piece, weight- relieved Brazilian mahogany body creating an overall depth of 47mm, a couple of millimetres thicker than a Les Paul Junior. The slightly darker-hued neck, again mahogany with a centre maple stripe (approx 3.5mm wide), adopts a beefy ‘medium C’ shape and is topped with a ziricote fingerboard with a mid-brown striped grain that features the tastefully unusual wave inlay (a thin maple veneer that continues through the headstock facing) plus small 4mm mother-of-pearl face dots.

James cuts each ’board from a larger five-string bass guitar-sized fretboard blank which gives him enough wood to use for both the glossed head facing and the fingerboard’s edge binding which sandwiches another thin maple strip. It’s a classy piece, finished here in a natural ‘poly-based’ gloss - although you can choose numerous colours and ’bursts.

If there are vintage-y details like the 17-degree headstock angle and the Gibson-style scale and fingerboard radius they are tempered with not only those original inlays but the shaped thru-body stringing that sits behind the recessed tune-o-matic.

To give this test a unique spin, James actually made us two identical guitars, the only difference being the pickups. Our ‘low’ output sample, serial number 25, features a Bare Knuckle Stormy Monday bridge humbucker married to a Blue Note humbucking-sized P90 at neck.

The ‘high’ output version, number 24, has a Riff Raff at bridge and a Nantucket humbucking-sized P90 at neck. The pickups are suspended from the top of the guitar and there are no rear cavity covers so all the electronics are fitted more like a semi - tricky stuff and not especially maintenance or modder-friendly.

It might be the first time we’ve had a James Collins guitar in our hands but this is no modernist drive: it feels familiar and quite classic. With the neck joining the body at the 20th fret there’s certainly a bit of an SG feel in the seemingly extended neck. The upper strap button is placed on the bass-side horn tip so although there’s a slight neck pull strapped on it doesn’t tip forward as it would with a heel-placed button.

Despite its ‘medium’ category, the neck feels pretty big - measuring approximately 24.1mm just behind the 1st fret and 26.2mm just behind the 12th - with a generous shoulder unlike the very slightly V’d shape of our reference ’57 Les Paul Junior, which with a depth measured at the same places of 22.3mm and 24.6mm, actually feels rather slim in comparison. The neck shape certainly gives the guitar a really chunky, meaty feel that recalls, despite its flat front, a Yamaha SG1820 with which it shares a similar symmetrical cutaway style.

With a pretty regular string height at the 12th - approximately 1.5mm on the treble side; 2mm on the bass - the 0.010s suit the guitar perfectly. The medium-small gauge fretwire (approximately 2.13mm wide x 1.1mm high) is beautifully fitted and again suggests quite a vintage-y feel.

With our ’57 Les Paul Junior and a Duncan Seth Lover-equipped Knaggs Kenai as references we’re already in vintage rock heaven before we plug in our low output number 25.

Initially, yes, low output is apt, as it sounds more polite than either of our references. But the quality of the sound is hugely impressive. Clean there’s a beautiful bell-like chime that’s graduated by the spikier bridge, the textured balanced mix, to the mellow but not over-rounded neck; push in the volume and it splits the bridge, voicing the slug coil and there’s an obvious drop in output but a hugely useable treble lift = the mix voice here is to die for if your tastes lie on soulier, funkier side of the tone tracks.

Frankly, with a pretty basic pedalboard this is exactly the sort of guitar that’ll get you through those diverse function gigs.

The higher output guitar simply injects a little more chilli sauce that pushes the amp a little harder and seemingly thickens the mids a little at the very slight expense of the highs. Swapping between the two you notice a subtle difference every time and the best way to sum up our thoughts is that the high output (which is really a misnomer) guitar would just take the rock covers band gig - everything is just a little easier, juicier - while the lower output guitar would be this writer’s choice for the quieter jazz and mid-tempo blues to rocking and rolling dance set function gig. The truth is either would do both jobs.

Both are fine sounding instruments, not least if you use the beautifully graduated tone control. Musical is the word.

If you’re in the market for a quality Gibson-esque electric with plenty of customisation in mind then we have to recommend James Collins. There’s a very fine balance between vintage vibe and more modernist individualistic elements that on the one hand makes you feel like you’re playing an old friend but on the other you’re not just acting like yet another Les Paul guy chasing your ’Burst dream. Workmanship and sound are impeccable.

James’ concept of building two identical guitars but fitting low and higher output Bare Knuckle pickup sets is illustrative of the thought behind his whole endeavour. Although BK’s Riff Raff/Nantucket set are hardly high output metal pickups they heat up the GTB enough to make a noticeable difference if classic-to-modern rock styles are your bag; yet the low output Stormy Monday/Blue Note equipped GTB would, for this writer, be the one. You may hear and feel things differently but whichever pickup set you go for both produce some seriously good sounds. A maker to take notice of.