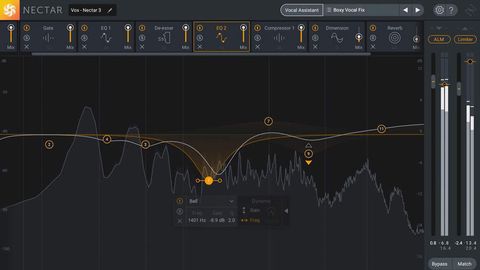 Whether your vocals are sung, spoken or spat, Nectar 3 will help you get them sounding a million dollars.

Utilising an array of reorderable modules to apply voice-optimised dynamics shaping, EQ, pitch correction, harmonisation, de-essing, distortion and effects, it’s become a go-to plugin for the professional producer looking to quickly and easily get vocals of all kinds - from sung and rapped to dialogue and voiceover - sounding their best, entirely in the box.

Nectar 3 (VST/AU/AAX/RTAS) redraws the GUI to achieve homogeneity with recently updated iZotope stablemates Neutron 2, Ozone 8 and RX 7, and make the various displays (spectrum displays, gain reduction trace, etc) more visually immediate. Nectar 2 was starting to look decidedly retro, so the graphical makeover is a welcome move, as is the newfound ability to freely resize the window by dragging the bottom right corner. There is one minor snag, though, in that the controls for many of the modules (the worst offender being Compressor) can obscure a chunk of the waveform or spectrum view over which they’re situated when the window is set small. It’s not a serious problem, but we wonder if it might be possible to make the control panels float (deceptively, they look like they do already) so that they could be moved out of the way when necessary.

The next area of major change is the modules themselves, which have been added to and reconfigured, and are now loaded into the top bar ‘rack’ as required, rather than being activated in the old sidebar. Essentially, you’ve still got access to every process and function of Nectar 2, but with a few things moved around. The FX module is now called Dimension, for example; the Distort and Decimate options have been shifted to the Saturation module, and the Delay module’s Impulse Response view and Compressor’s Spectrogram are no more.

New to the party are the filthy Grunge mode for the Delay module, a Close Threshold for Gate, eight voices for Harmony (up from two), better Pitch tracking, and sonically improved algorithms for Delay and Dimension’s Chorus, Flanger and Phaser effects. The biggest story in the modules department, however, is the massive overhaul that’s been made to the EQ - see EQual rights.

All modules now feature dry/wet Mix controls in their top bar panels, and, as you’d expect, Nectar 3 shows up in Neutron 2 and Ozone 8’s Visual Mixer, Masking Meter and Tonal Balance Control. Oh, and the separate Nectar 2 Breath Control plugin has been ousted in favour of the superior RX 7 Breath Control - although why it’s not been worked in as a module is a mystery.

And so to the main event. Joining Neutron 2, Ozone 8 and, on rather different terms, RX 7, Nectar 3 boasts a machine learning-driven system for setting the plugin up automatically based on analysis of the input signal. Called Vocal Assistant, it might just be the most impressive implementation of the concept yet.

Vocal Assistant creates a custom preset to make your vocal sound objectively ‘better’ and more mix-ready. Having selected Assist mode and pointed the algorithm in the right direction by choosing Vintage, Modern or Dialogue as the source ‘Vibes’, and Light, Moderate or Aggressive as the processing ‘Intensity’, the input signal is analysed for a few seconds, during which the modules are set up in the background to correct for dynamic fluctuations, resonant peaks, sibilance, and even adjust pitch correction and reverb mix. As with its similarly equipped siblings, the resulting preset is only meant to be a starting point, but Nectar 3’s Assistant gets much closer to a final usable patch than Neutron 2 or Ozone 8’s, due to the less diverse nature of the human voice in comparison to the infinite spectral and dynamic variations of tracks, buses and full mixes.

Nectar 2’s eight-band EQ was no slouch, but Nectar 3’s blows it out of the water. For many, it will be the primary reason to upgrade.

First of all, like the Compressor module, you can have two of them in a preset now. Second, the maximum number of bands has been tripled from eight to 24, and a couple of new filter types have been added: Proportional Q Bell and Band Shelf. That’s all good stuff, of course, but what really takes Nectar 3’s EQ to another level are its two Dynamic Processing modes.

Switching a band to Dynamic Gain mode enables a Threshold to be set, above which the signal for that band is either boosted or cut - ie, compressed or expanded. It’s just the thing for taming particularly wild and variable resonances or sibilance, or bringing out understated details.

Even more powerful than that when it comes to getting vocals sounding spectrally on point, however, is Follow EQ mode. Turn this on for a band and it automatically targets the closest harmonic in the source material (the fundamental frequency is determined automatically), then tracks it up and down the frequency range as it changes in real time. Removing harshness and applying consistent sweetening have never been so easy.

In the less technologically ambitious Unmask mode, Vocal Assistant uses iZotope’s increasingly meaningful Inter-Plugin Communication to clear space for the vocal by applying equalisation to any other track that’s fighting with it for space. If the masking track isn’t already hosting an instance of Nectar 3 or Neutron 2 (both of which support IPC), load the included Relay plugin onto it, then select it in the Unmask menu and start playback. Nectar 3 analyses it in relation to the vocal and applies a static EQ curve to pull it away from the vocal.

The process can be repeated for as many tracks as you like, and the results are invariably well- judged and thoroughly effective, giving the vocals a perceived lift that’s almost always beneficial. The Unmask EQ curve is separate to the actual EQ modules in the Neutron 2 and Nectar 3 plugins, so while you can’t tweak it, you can rebalance the signal using those modules.

We’ve just got space to wrap up with a quick run-down of the remaining new features. Auto Level Mode ‘rides’ the input level fader for dynamic consistency; the Limiter is now a button and fader on the output level meter; Pan and Width are adjustable; and Celemony’s Melodyne 4 essential audio editor is included.

Nectar 3 sounds incredible and flows beautifully, and we can’t recommend it highly enough to any vocal-wrangling producer. The upgrade for existing users of v2 is rather less clear-cut, though, as at only 50 quid below the full price, the £179 upgrade is expensive. Whether or not it’s worth that second/third-time outlay will boil down primarily to how much you feel you need Vocal Assistant and the souped-up EQ, both of which are brilliant but perhaps not, truth be told, all that essential.