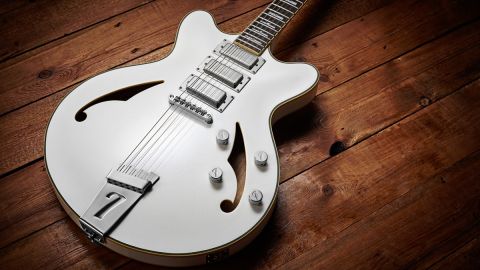 A guitar to have a tonne of fun, fun, fun with.

Right. The answer to your first question is that Jeffrey Foskett, proud recipient of a new Italia signature model, has played guitar with The Beach Boys since the 80s.

Now, you don’t get to hang 10 with Brian Wilson if you’re still plodding your way through Bert Weedon’s Play In A Day. So, Jeff clearly cuts the mustard.

Perhaps you may remember that Mr Foskett also aided and abetted Italia big cheese Trev Wilkinson in the creation of his first Italia signature model, a Cobalt Blue electric 12-string that owes a fair old splash of its DNA to the Rickenbacker 360/12.

Look closer still - the chrome control knobs are cheeky tweaks of your classic knurled Gretsch jobs, albeit embossed with the Italia ‘I’ instead of a ‘G’. There’s more ‘I’ candy in that short Duo Jet-esque chrome tailpiece (paired with an anchored tune-o-matic bridge). A triple mini-humbucker pickup layout recalls the equally well-endowed Gibson Firebird VI.

You also get a set 629mm (24.75-inch) scale maple neck, a rosewood fingerboard, 22 vintage profile frets, plus a set of tuners with chrome tulip buttons. Of course, this being an Italia job, there are some clever tweaks that elevate it above just another tribute act. Take another look. Three pickups. Four control knobs. No switches. Either Italia has forgot something very important or they’ve conjured up a trick new wiring loom. Hold that thought...

So, the two controls nearest to the JF6’s bridge and tailpiece are a master volume and master tone. The controls on the other side of the soundhole are a centre-notched blend for the bridge and neck mini-buckers and a push/pull for the middle pickup. The blend is a favourite spec tweak of Jeff ’s. At one end of the sweep you get the bridge pickup running solo. As you rotate the knob, the neck pickup increasingly joins in.

Moving across to the other knob, with the push/pull in the down position, the middle pup is wired to the master volume. Pull it up and the control now functions as an independent volume, with the master bypassed, so you can dial in as much of the middle pickup as you like.

Soldering iron wizardry notwithstanding, we do miss a proper old toggle switch to grab. On the plus side, the JF6 delivers a lot of tonal flexibility which makes it an exciting studio prospect.

Thing is, for all the spiffy switching, it’s the bridge pickup that commands most of our attention. Bright and punchy on clean, it snarls when you kick in some grit with an old school attitude reminiscent of a 60s Epiphone Riviera or Rickenbacker 330.

As expected, dialling in more neck pickup fattens up the tone yet it doesn’t sound overly civilised or clinical. The bridge and neck units offer so much tonal variation that we wouldn’t miss the middle pickup if it dropped off the spec list. Though it does a good job for chunky sounding rhythm stuff.

There is one niggle we should mention. The un-deployed bits of the strings, that is, the stuff stretched between the bridge and tailpiece, vibrate unsympathetically when you hit certain notes on the fretboard. Okay, these ghost notes are way less noticeable when you’re running the JF6 through an amp but they’re not exactly what you’d describe as good vibrations.

The JF6 is a typically well-thought out concept from Trev Wilkinson. The rotary controls, and those three pickups, serve up a menu of tones you don’t expect from traditional selector switch spec’d semis. Figure in build quality that’s exactly what you deserve at this price point, and playability and tone that punches up into four gures, and Italia and Jeff have a real contender in their hands.

Trying to decide between an Epiphone Sheraton or a Gretsch Electromatic Centre- Block guitar? You’re now in a deeper pickle than you anticipated. We couldn’t put the Italia down during its time in our hands.