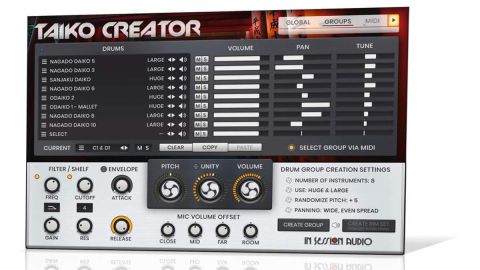 Taiko are the characterful Japanese drums you often hear in big movie action sequences and videogames.

Ranging in size from small to absolutely enormous and played with thick batons (bachi), they’re invariably employed in ensembles, and while they’ve long been a staple inclusion in any serious professional percussion sample library, there aren’t too many entirely dedicated to them. In Session Audio’s new Kontakt Player instrument hopes to become the new standard in taiko emulation, differentiating itself from most by capturing each of its drums individually, rather than as an inextricable group, and including a sizeable library of MIDI grooves (20 “song suites”), played within the interface but exportable by drag-and-drop.

A Taiko Creator kit (of which ten excellent presets are included as Snapshots) comprises 15 keymapped groups of up to nine Drums, Percussion (sticks, woodblocks, etc) or Auxiliary sounds (booms, ambiences, vocal shouts, etc) each. The 24 drums have been sampled as head (seven velocity layers, seven round robin variations) and rim (four layers, seven variations) hits, with three of them also including mallet articulations; while the percussion sounds have four layers and seven variations each. Within each group, each sound can be levelled, panned and tuned up to an octave up or down. As well as the ability to mix and match sounds within groups, and groups within kits to build your own custom ensembles, the other benefit of having control over the individual drums is that their timing relationships can be altered using the Unity control, which dials in ‘humanising’ discrepancies at both group and global levels.

Taiko Creator has all the niceties expected of any serious Kontakt library, including four range-adjustable mic positions, convolution reverb and five-band EQ, filters and envelopes for each group, pitch control, distortion and widening, plus an array of randomisation options. It sounds incredible, offers plenty of sound shaping and plays beautifully, and our only wish would be for the addition of a Group mixer as an alternative to the per-page system.