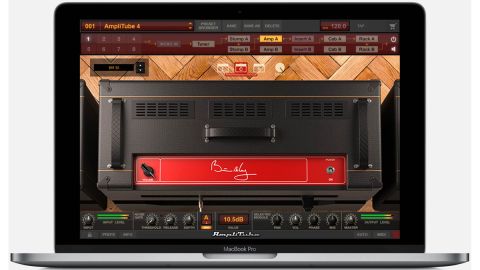 There is no easier, more affordable or more convenient option for the Queen fan to nail Brian May's tones.

Modelling famous guitarist's rigs and making them available on an easy-to-use software platform is a specialty of IK Multimedia's AmpliTube signature software suites.

Previous editions have compiled tones from the likes of Slash and the late Dimebag Darrell, offering players a convenient one-stop solution for cloning their heroes' tones. The AmpliTube Brian May is created in this fashion, and is meticulously modelled on May's studio and live rigs.

You'll find models of his famous triple Vox AC30 setup, the essential KAT treble booster which gave May's overdriven amps that bright sparkle and extra crunch, and the unique modulation of his trusty fOXX Foot Phaser and a wah spec'd after his rackmounted Dunlop Cry Baby. The Star Gate noise gate makes sure his royal toneness' rig doesn't get to heavy on the noise.

Altogether the AmpliTube Brian May models two amps, three cabinets, and up to six effects. Queen super-fans will go nuts with the home-built "Deacy" Amp, complete with user adjustable battery power, which is modelled here after the original amp built by John Deacon in 1972. A May and Deacon-approved replica was made by KAT in 2011 but sold out in a flash, only sporadically turning up second-hand on sites such as Reverb.

And then there's the Red Special. It's one of the most iconic signature electric guitars in history. While the BMG versions are incredible and affordable enough to be viable options for most of us, here IK Multimedia have put the Red Special into a stompbox so that you can get its tone no matter what guitar you are using.

One of the difficulties of getting Brian May's tone is that his guitar was heavily layered in the studio, and that guitar was itself unique, with its semi-hollow build, its trio of Tri-Sonic pickups and series of on/off and phase switches for each pickup.

With the AmpliTube Brian May, it's pretty easy. The software suite integrates neatly with the free AmpliTube Custom Shop or AmpliTube 4. As with all the AmpliTube software packages, the layout here is intuitive. You will spend little time getting to know the software, and all the more time dialling in your favourite tones and experimenting. More time playing.

• IK Multimedia AmpliTube Slash for iPad
With six effects and two amp models, it's so easy to nail Slash's tone


IK Multimedia and Jamie Humphries, who plays guitar in the stage production of We Will Rock You, fine-tuned the details of Brian May's live and studio rigs, with presets created for some of Queen's most-loved tracks. These presets are easily recalled, and are hugely musical. Brian May's epic harmonic layers are easily achieved using the three AC30s in a wet/dry/wet configuration, with a little pitch shifting on the left and right channels to give you that wide-sweeping harmony tone as heard on Killer Queen.

The results are, well, guaranteed to blow your mind. Seriously. It doesn't matter what guitar you've got. The Red Special pedal will change its tone, and propelled by the Vox AC30's volatile mid-range crunch, and as good a model of May's signal chain as you will find, that operatic magic is all yours. All you need is the curly hair and the curl guitar lead. Those, we're afraid, are sold separately.

What the web says

"This ultimate Brian May rig is user friendly and the presets cover all the iconic Queen tones. IK Multimedia has delivered the works!"
Guitar World

"As a tribute tool IK Multimedia’s Brian May Collection for AmpliTube is by far the best product I’ve ever used as it’s the first product bearing Brian’s name which, unlike products that came before, includes not only small parts of his sound but all of them in one environment."
Production Expert