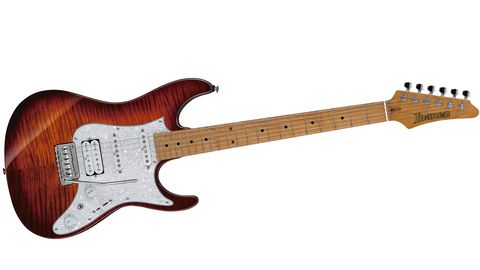 A highly spec'd, ultra-versatile electric that has the potential to unite players of all stripes.

Look, we could open this review by banging on about how Ibanez is synonymous with shred gods Joe Satriani, Steve Vai and Paul Gilbert, but we all know there’s more to the Japanese guitar giant than pointy headstocks.

Over its six-decade history, the company has found favour with guitarists of all stripes - the jazz-friendly Artcore, the indie delight that is the Talman - but the AZ series marks its most laser-focused attempt to create the ultimate ‘players’ player’ guitar, courtesy of four years’ R&D and input from six-string savants such as Tom Quayle, Martin Miller and Andy Timmons. But can one guitar be all things to all players?

The AZ224F clocks in at the more affordable end of the line-up, with an Indonesian build and basswood (rather than the upper-end Prestige’s alder) body, but still delivers the core of what makes the AZ range such a winning prospect: in short, everything.

Just sitting down with the AZ is a revelation; the looks may be classic, but the comfort and fretboard access is unprecedented. Ibanez’s super all-access neck joint means you’ll have no problem up at the dusty end, while an ergonomic back contour makes for a guitar that melds into your body. That neck will be a surprise to anyone used to Ibanez’s legendary, super-skinny Wizard profiles, however; the oval C, bordering on D, profile is certainly more of a palm-filler, but we reckon it has a more universal appeal while still being svelte enough for fretboard heroics, especially with its incredibly light sealer finish.

The vibrato is a joy to use, too; even if you tend to shun whammy, you may find yourself adding in subtle shimmers, such is the smoothness of the system and stability of the tuning.

While the AZ’s playability is immediately gratifying, the pickup switching takes a bit more thought, and the key lies in the Alter Switch. Flick it down, and the selections are as you’d expect from an Alnico V-equipped HSS guitar: a clutch of fat, hi-fi single-coil tones that excel at contemporary clean sounds.

But switching in the other direction opens up four additional tones: position five runs the two singles in series to approximate a humbucker; next is the neck and single humbucker coil nearest the bridge; then the singles in series with the humbucker; followed by the single humbucker coil nearest the neck; then the humbucker as normal. That grants you access to darker, jazzier neck tones, punchy all-pickups-on sounds, and thinner single-coil snap.

Combined with the standard positions, there’s an unparalleled choice of tones - if you can’t find a mid-position quack you like here, it doesn’t exist. That versatility makes the AZ a dab hand at just about any kind of playing – although it is worth noting that while the humbucker does the classic rock thing extremely well, it’s not the most high-output pickup in the world, so metal players might want a boost in their signal chain for seriously high-gain sounds.

What’s most striking is how well-balanced the pickup sounds are across the range - nothing’s overly dark or spiky. It all adds up to an inspiring set of tones that retain their character through gain. It’s hard to think of an area where Ibanez could improve here - sure, ebony fretboard and hardtail options would be nice, and some players may just prefer a simpler coil-split to a whole extra set of pickup positions - but that’s testament to the company’s meticulous attention to spec.

We love the subtle output jack, hidden in a recess near the strap button, and the thumbwheel to lock the whammy bar in position. With the AZ line, Ibanez has created a guitar that has the potential to appeal to just about any player – and in an age of division, that’s a very welcome achievement indeed.