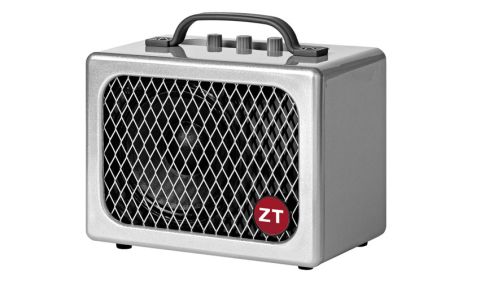 For the same price, you could get your hands on something with real valves. Additionally, Line 6, Peavey, Fender and Vox all do modelling combos that are cheaper than this, so if it's an inexpensive practice amp you're looking for, check out those manufacturers first. For sheer portability, however, ZT's Lunchbox Junior is unbeatable.

Two words go with cheap: cheerful and nasty. Rejoice, then, that the ZT Lunchbox Junior is in the happy camp. ZT Amplification has updated its range, adding an even smaller little brother to the already pint-sized Lunchbox.

As you may have gathered, the key selling point with this amp is its tiny size. We'll admit it, we don't have a team of hairy-arsed roadies to lug gear between continents, and we're sick of the spine-crushing weight of even modestly sized valve combos. But at just 2.3kg (5lbs in old money), the Lunchbox Junior only weighs about half as much as your actual guitar. Think of that the next time your 2x12 is pulling your arm out of its socket.

Plug in and switch on, and we guarantee you'll be shocked. What should be a tinny, fuzzy sound coming out of the tiny speaker is rich and warm, with more bass than you'd have any right to expect. In contrast to some other solid-state amps we've tried, the clean sounds aren't harsh at all; instead, they're jazzy and round.

Played with a heavy mahogany-bodied guitar, the sound can get a little muddy, but adjust the tone control to around 12 o'clock and you get a lovely jazzy roundness that's all velvet jacket and arty French photography.

You're never going to get that classic valve rock sound out of something that doesn't have valves, and true to expectation, the Lunchbox Junior doesn't have that in its repertoire. But with judicious use of the gain control and a fuzz pedal, you'll get some seriously enjoyable lo-fi American noise out of this little box - listen to Mudhoney's Touch Me I'm Sick and you'll get the idea.

Much as it's great fun, the downside of an amp this small is that it's generally not going to be usable in a gigging situation. If you're playing in a gazebo, or in a coffee shop, and you can persuade your bandmates to reign it in a little bit, you might be all right.

You've got a good 35 watts to play with, but solid-state power is a very different thing to valve power, and this combo won't fill a room like the 15-watt Eagletone Raging 15R we looked at a few months back, or even a five-watt valve combo, for that matter. But the supreme portability and quality of sound makes this little amp ideal for practice and recording, especially if you find yourself struggling for space.

You can even power a nine-volt effects pedal from the back, though it would have been nicer had ZT seen fit to include the appropriate lead to do so, rather than making us pay to use one of its most-touted features.