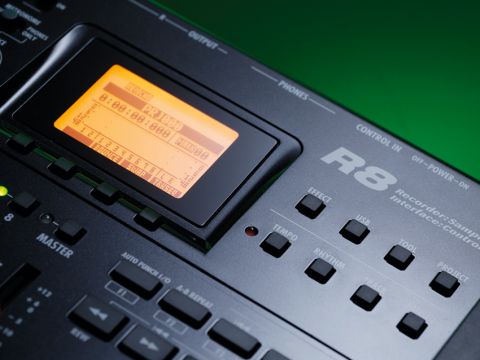 Hardware or software recording? The R8 offers both options for anyone wanting to make a start in recording.

Zoom's R16 and R24 personal multitrack studios not only function as conventional recorders, but also provide a route into computer-based recording as they act as both a USB audio interface and a control surface for computer software.

The latest machine in the series, the R8, puts all this in a smaller and more affordable package, offering a set of four production tools - an eight-track recorder, an audio interface, a DAW control surface and a sampler complete with drum pads and a rhythm machine.

The R8 is powered from a supplied mains adaptor, or by batteries if you want to use it out and about - something that should be easy as it is has a footprint smaller than an A4 sheet of paper and sports a pair of built-in mics.

Recording is done to SD cards and you can record one or a pair of tracks at once, either through the onboard mics, external mics or instruments connected to the two inputs, one of which can be switched to Hi-Z to take a direct guitar or bass signal.

There are insert effects that can be recorded with the signal, including 18 guitar amp models and six amps.

A metronome is provided to help timing, but if you want something more advanced the R8's rhythm machine allows you to program your own beats with a set of pads or use the 472 onboard preset patterns. An eight-voice sampler also utilises the pads and allows you to loop audio data on any track.

As an audio interface, the R8 supports two inputs and two outputs to your computer and, as a copy of Steinberg's Cubase LE software is included with the package, you have a computer-recording option straight out of the box.

The R8 can also control transport functions for your recording software as well as mixing functions via its faders.

If you want to create a solid foundation for your song you can use the onboard rhythm machine or sampler, or a combination of both.

The rhythm machine gives you 10 drum kits to choose from and, if you don't want to create your own patterns, the preset patterns include plenty of phrase variations including intros, fills and the like. Zoom also includes 500MB of sampled drum loops for use with the sampler.

The rhythm patterns or sampled loops have to be assigned to tracks and sequenced by an onboard sequencer - something that we didn't find to be particularly intuitive, but there's plenty of scope for creativity once you're up to speed on it.

To record guitar, just plug in, use the onboard tuner, select an insert effect and go. The amp sims, taken from Zoom's G2Nu, are very playable and suit a wide range of musical styles.

If you want to keep your hands on your guitar, there's the option of adding a footswitch to the system to initiate recording.

Alternatively, you can program automatic punch-in and out points. If you want to record a gig on location, or perhaps an acoustic guitar, the onboard mics do a pretty good job.

A couple of send and return effects - reverb and either delay or chorus - can be applied to individual tracks and, when you've finished recording, applying mastering effects adds a nice polish as the song is mixed down to a dedicated master track.

Certainly useful as a musical sketchpad, the R8 is also capable of producing polished demos and can double up as a guitar practice tool by using the amp sims and playing along to the onboard rhythms.

It could also easily be taken to a rehearsal room or gig to capture the sound of the whole band or perhaps a stereo drum track that you could use as a basis for further overdubs - either done on the R8 itself, or in Cubase on a computer, using the R8 as an audio interface.

For its asking price, the R8 offers a lot of whizz for your wonga, straddling the worlds of hardware and software recording - and could well prove to be your ideal introduction to both.