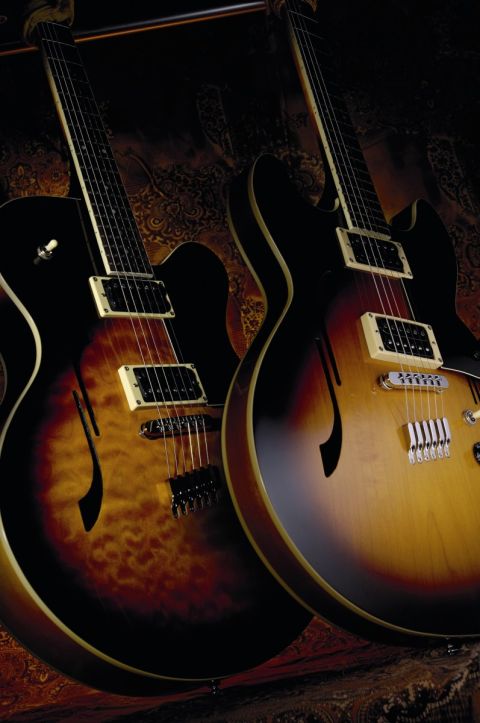 The AE500 is simply a very competent guitar but the SA500 stands out as something a little special: a good sounding and very affordable version (with some modern twists) of one of the all-time classic guitar designs.

The AE500 is a single cutaway with humbuckers.

The SA500 is a double cutaway guitar.

While Yamaha can hardly be called a copyist company, some of its mainstay electrics fall into the 'clearly inspired by…' category. These two semis are no exception: the SA500 is an affordable ES-335-alike and the AE500 a more generic deep bodied single-cut in the Gibson/Gretsch mould.

Both, however, benefit from Yamaha's recent modern design makeover that has elevated guitars like the solidbody AES620 into a classy single-cut that stands out in its class as much by its quality and price as its unique style.

Indeed, Ibanez launched a very similar style electric in 2006, so we were perhaps not the only ones to notice these cool kids on the block.

Yamaha always maintained that the shape of the AE620, for example, was taken from their large-bodied semi (the AES1500) and was never an adapted Les Paul design.

The AE500 is, like the AES1500, a large hollow-bodied semi and you can see pretty clearly where the down-sized AES620 originated, although the upper shoulder here looks a little more square than either the AES1500 or its solidbody derivatives.

And unlike the SA500's obvious ES-335 inspiration, the AE500 is a more generic style than any specific Gibson, for example.

Indeed archtops with a rounded cutaway usually have a broader body than 16 inches (usually 17 or 18-inches - now that's big!); you'd perhaps be better off to think of this as a ES-175 in terms of width, it's slightly shallower in depth and, of course, has the rounded, not pointed, cutaway.

The actual cutaway is probably the least successful part of the design. The body depth, heel, and 16-fret neck-to-body join means there's not a lot of room - compare it with the roomier cutaway on the SA500, for example - to get to the top 22nd fret, though not all of us would need to get right up the dusty end on a guitar that's clearly aimed at jazzier for bluesier styles.

Despite its hollowbody appearance there's a substantial wooden block under the bridge area which not only adds weight but gives - acoustically at least - quite a tight resonance to the sound. In fact, acoustically it's on par with the SA500 volume-wise.

The top itself seems properly braced so perhaps this large block is intended to reduce feedback for those players who want more onstage volume but the older look of an archtop.

Broadly speaking, however, aside from the different body dimensions, everything else about the guitar seems identical to the SA500.

That said, there's a nice hint of quilt flaming on the lightly arched front and back compared to the plainer SA500 which suggests you'd be wise to check a number of guitars - you never know, you could get a nicely figured piece at the same price!

Having just had the pleasure of playing a couple of nice old ES-175s (which this writer could only dream of affording), this AE500 was doubly frustrating. Its unplugged sound is tight and on the thin side and the whole thing feels over-built.

Plugged in directly after the SA500, it sounded thinner with less lower mid girth. Both humbuckers sounded a little over-powered and virtually every sound benefited from some volume and tone reduction on the guitar.

Adjustments like reducing the height of the bridge pickup and pulling it down on the treble side all began to create the sound we'd imagined we should hear.

Again, the neck pickup is perhaps the place to start and with some tone reduction and a clean amp, it's a very useable jazz tone with soft but not distinct lows and a smoky, rounded treble response. Perhaps a set of .011s would also make sense to fill and round out the tone.

Despite that large bridge-block, the feedback threshold is far lower than the SA500: but that's the point. Yes, at low volume you can create some mad sounds with tuneful feedback - very handy to record with - but in reality, for live use, you're limited to older-style cleaner sounds.

And there's no shortage here. From the darker neck voice through to that twin pickup mix, which like the SA500 creates some very useable sounds, there's a whole history of classic sounds. Even the bridge pickup with some tone rolled off a bit began to fit in.

We were ready to dismiss this one, but a little time and thought reveals it to be quite a guitar that not only looks impressive but also has, with a little work, some good and quite classic sounds onboard.

How many of us remember semis of 10 to 20 years ago, or even earlier Japanese-made examples? Clunky and funky springs to mind. Here, however, we have yet another reminder of just how good Chinese guitars are becoming.

Build quality is pretty smart throughout and even the finish - typically a thick polyester covering - looks quite thin and is near-faultlessly applied and polished. Both guitars are a little weighty and slightly over-built, and both sound a little buzzy and metallic unplugged.

But when the Chinese start to focus on better timber selection, even thinner finishes and improved USA-style playability, then the quality of instruments like these will become scary.

But for the moment, here are two very good semis that bring a little originality to the table. While the pickups seems about right on the SA500, slightly lower-powered humbuckers would suit the AE500 more.

We certainly found that reducing the height of the pickups (not to mention the volume controls) helped to create a more original archtop tone.