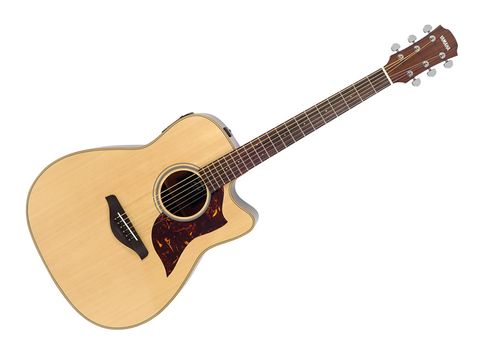 Yamaha sure knows how to build a fine and affordable dreadnought electro.

Yamaha doesn't often launch an entirely new line of acoustics. Instead, the FG, APX/CPX and L ranges have evolved or been revised over the years - which makes the recent introduction of the A Series cutaway electros a significant one.

Comprising eight models split between the solid-top 1s and all-solid-wood 3s, guitars are then sub-divided into rosewood- and mahogany-backed versions. The range focuses on just two body styles: dreadnought and concert.

The 1s carry a three-band analogue preamp, while the 3s load in an SRT mic-imaging blender system. Both use the new SRT undersaddle pickup - incorporating six individual piezo elements on a wide ribbon strip - recently seen on the APX/CPX1000 and APX500II.

In pricing terms the As, loosely speaking, slot into the catalogue between the FGs and the L-Series derivatives. Yamaha's aim is to appeal to gigging and recording guitarists looking for a serious performance instrument, as opposed to, say, the FGs, which have a more playing-at-home vibe.

The A Series' revised neck configuration and string spacings, which we'll look at in a minute, are intended to more overtly attract the electric-leaning player. It's understood that much of the impetus behind the development of the A Series came from Yamaha in the USA.

Given that and the guitars' mid-market pricing between around £600-£900, it's hard not to infer that the company has Taylor's 100 and 200 Series on its hit-list.

Save for its large, pointy tortie scratchplate - borrowed from the company's mid-seventies N1000 acoustic - the A1M is, at quick first glance, standard Yamaha cutaway-dreadnought fare. But a closer inspection reveals various departures.

The gloss, solid Sitka spruce/laminated mahogany body is bound in mahogany, a first for Yamaha at this price point, even though wood bindings are fairly commonplace on some competitors' instruments. The guitar, like all As, also gets a second strap button at the heel (good to see), and its ebony bridge is a nice upmarket touch.

The full-scale mahogany neck is a key design aspect, its set-up common throughout the series. Kicking off at 43mm across the nut, it offers a shallower-than-previous, flattish-back 'C' profile of near-constant depth.

The edges of the rosewood fingerboard's binding are comfort chamfered and, joy of joys, string spacing at the bridge is broadened to a respectable 55mm: an arrangement sadly rarely encountered on earlier Yamahas. The result is a snug handful at one end, and decent pickability at the other.

Construction-wise, minimising timber wastage is clearly a priority, since the scarf-jointed neck is a three-piece sandwich on both the main length and headstock, with another trio of timber making up the heel. As opposed to Yamaha's usual, smooth satin finishing, the finish is an open-pore - not grain-filled - low gloss.

The company spins this positively for its 'woody' touch, though some might say it looks and feels a tad rustic. It remains a slick player, though.

With its batteries housed in a separate compartment on the shoulder, the guitar's System 66 preamp's layout is familiar territory, with three-band EQ on small rotaries, a wide-range (80Hz-10kHz) mid-sweep slider, and an auto-chromatic tuner. We can't argue with the tuner's accuracy but it still doesn't mute the system when activated; it's about time it did.

While all-solid A Series models, such as the AC3R, have a slightly deeper low-end and a shade more resonance, the A1M sacrifices little acoustically. It packs a decent dread punch, and the highs have that Yamaha trait of sustainful, sweet-edged balance and brightness.

Powered up, the new pickup makes for a happy marriage. Piezo 'quack' is entirely absent, the delivery sounds natural, fluid and open, and the EQ and wide-range mid-contour access an impressively broad tonal palette, without ridiculous or harsh extremes. Reasonable gain and spot-on cross-string output balance contribute to a very enjoyable performance.

For most of us, the 1's analogue system will do very nicely, offering a high quality, easy-to-use repertoire - but players doing a lot of recording may want to take a look at the all-solid 3's imaging system, with its ability to add mic-led textures and its enhanced overall versatility.

One thing's for sure, though: whichever route you take, and whether you go for a dreadnought or a concert, you'll find these new A Series are well-sorted instruments, built to Yamaha's usual high standards, sounding good and playing well.