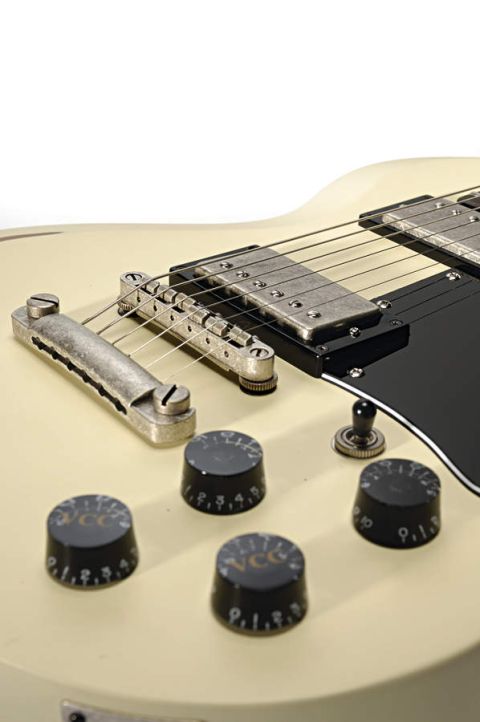 Where has this guitar been all our lives?

It's got Grover tuners.

During the shred explosion of the '80s, day-glo painted electric guitars offered big haired guitarists both formats (they called them 'superstrats').

Well, it's time to get your arse down there again to check out Washburn's WI-64V and its mind-bending VCC (Voice Contour Control) technology.

The WI-64V has been hewn from a slab of mahogany, and kicked about to make it look like it's been owned by a butter-fingered 60s session man.

Where most guitars let you choose between either a singlecoil or a humbucker tone, this axe lets you blend the sound in increments, unlocking a voice that's anywhere between the twang of the former and the warmth of the latter.

Washburn likens the concept to a dimmer switch - but it's much more exciting than that.

From the slim body to the manageable neck, the Idol's rocked since its launch in '99. The scuffing on this guitar is the icing on an already tasty cake.

Then there's the VCC system. There's a control dial for each pickup, so first TG turned both down to '1', bringing in a singlecoil snap that's perfect for biting riffs. Next, we rolled both up to '10', put both feet in the humbucker zone, and unlocked a thick roar.

Finally, we rolled both controls to '5' and started racking our brains for words to describe the warm-yet-cutting hybrid tone that spilled forth. You've literally never heard anything like it. The WI-64V is versatile, cool, and cheap. What's not to like?