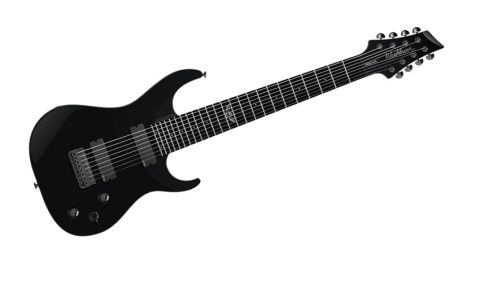 Washburn has done the impossible and made the eight-string guitar a tameable proposition.

Washburn has set out its metal stall with the new range of Parallaxe guitars. We take the flagship eight-string PXM18EB for a spin.

Suffice to say, if you're more interested in your open-position chords than Mixolydian face-melting at 190bpm, you'd better look away now. Such bold claims may seem audacious, but a quick glance at Washburn's artist roster confirms the company's supreme shredentials, with the likes of Nuno Bettencourt, Dimebag Darrell and Jennifer Batten all brandishing Washburns over the years.

The spec lists support Washburn's ambition, too. For starters, all the models in the series - whether single-cuts, double-cuts, seven- or eight-strings - are loaded with passive Seymour Duncan or active EMG pickups, while the hardware bears similarly impressive names.

Across the range, you get Grover machineheads for precise and stable tuning; the Buzz Feiten Tuning System for improved intonation across the neck; and extended cutaways, whether that's via Washburn's full-access neck joint or Stephen's Extended Cutaway. That means unprecedented access to the widdly end of the fingerboard, without scaring your audience away with poor intonation.

The increasingly obligatory eight-string model in a new guitar series can sometimes feel like an afterthought, but that's not the case with the PXM18EB: here, we have an extended-range guitar that feels like less of a novelty and more of a genuine instrument.

One of the typical problems with a 686mm (27-inch) scale eight-string is that tuning and intonation can be a nightmare. But it's here that the Grover locking machineheads and Buzz Feiten Tuning System really shine.

The tuning stability is among the best we've found on an eight-string, right down to that low F#, while the Buzz Feiten compensated nut and saddle ensures reliable intonation across the 'board.

The PXM18EB is also an absolute pleasure to play. Eight-string guitars are never going to be the most accessible of instruments, but the unfinished five-piece reinforced maple and mahogany neck is one of the easiest to get your hands - and head - around.

It sounds exactly how it should sound, too. EMG's 808 humbuckers are rapidly becoming the industry standard for eight-string pups and it's easy to see why: this axe grinds, chugs and, yes, djents.

Wielding such a powerful instrument can carry with it a sense of foreboding, but Washburn has done the impossible and made the eight-string guitar a tameable proposition. Hell, with a little bit of practice, you can even shred on it!