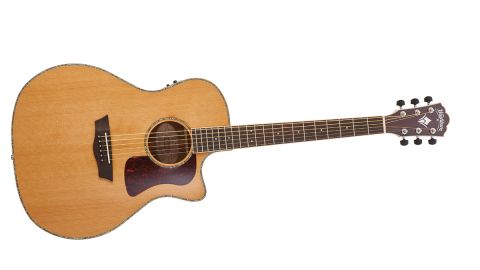 If Sitka spruce is the bee's knees when it comes to tone wood then why is the snappily-titled HG26SCE topped with cedar?

Actually, it's solid Western Red cedar, and, yes it does trump spruce in one regard. While spruce takes a while for its tone to mature - you unlock its potential by actually playing the guitar - cedar flashes its goodies pretty much from the first strum.

Unlike the HD10S and HD30SCE dreadnought guitars, the HG26SCE sports a grand auditorium-sized body with a cutaway for upper fret access. While a dreadnought is typically typecast as a strummer's guitar, a grand auditorium is generally recommended to fingerstylists, thanks to its well-balanced tone.

That's not to say that fingerpickers don't use dreadnoughts, of course - bluegrass players wouldn't use anything else - but grand auditoriums work well because you get an equal helping of bass, mids and treble from that body style.

Washburn has paired the solid cedar top with rosewood back and sides. The body and neck feature wood binding, and there's some pretty mother-of-pearl inlays around the soundhole - aka the rosette - and the cedar top's outer edge.

Picking the HG26SCE reveals a sweet top end and a satisfying growl from the bottom E and A strings. The onboard Fishman Presys+ 301T pickup system (the 'E' of the guitar's model number) does an admirable job of transferring that tonal character through an amplifier but you do miss that three dimensional quality of the grand auditorium body.