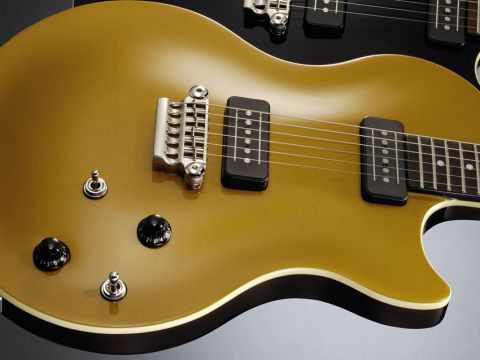 An excellent guitar that's very well executed from design to manufacture. We can't wait for the 55s and 77s!

We last looked at Vox's all-new high-end electrics back in 2008, and we liked what we saw. The Virage SC was a scaled-up single-cutaway, and the DC a downsized ES-335-inspired design, each using a unique approach to semi-hollow construction and round-your-body contouring.

Vox is now broadening the offer in both style and price to three new series - 33, 55 and 77 - alongside updated originals. Just like the critically acclaimed Japanese-made Virage, the new guitars were designed and prototyped in the San Francisco-based G-Rok design shop.

"The SSC is generally more considered in every department, with a deeper tone and a more brazen attack for blasting, dare we say Bonamassa-type blues."

"We develop the guitars in 3D CAD [computer assisted design] and write the CNC machine code right in our facility," explains Rich Lasner, G-Rok's vice president of development. "This ensures that the factory, Indonesian in this instance, will run the same programs and produce a high-quality guitar affordably."

We've got our hands on the solid-bodied SSC-3 which, along with its SDC-33 cousin, acts as the entry point into the new ranges.

The SSC-33 shares its unique top contouring with the SDC, making it almost as slight with a little more girth to support the single-cutaway format. It also has a slightly larger appearance.

Around the back, the heel is scooped away, this time with a half-moon style carve that provides a comfortable area for the palm and allows good higher fret access.

On balance, both 33s differ significantly in the feel department. The SDC's unsupported neck joins at the 19th fret in similar fashion to the Gibson SG, and fans of that design will feel right at home with the pitch of the SDC's neck. The SSC, on the other hand, joins at around the 15th, which gives it a more solid, Les Paul-like feel in hand.

Like the SDC, the SSC is no heavyweight, measuring 43mm at the rim, but it's perfectly manageable under any gigging rigour; it's also decidedly less bulky than another modern single-cutaway, the PRS Singlecut, which is at 49.5mm at the rim.

Acoustically the SSC rings out with intent and you can really detect added zing emanating from the MaxConnect bridge.

We have two different sounds represented by the 33's dual modes: clean and lead. The clean mode takes on a Fender-like stacked single-coil tone, while the lead mode is slightly narrower sounding than a classic PAF-style humbucker.

The SSC's lead mode isn't the hottest we've heard, but a little coaxing with some preamp gain brings the 33 to the rock 'n' roll party; that humbucker-like girth with extra sizzle around the edges and a slight percussive quality that's due in no small part to that resonant MaxConnect bridge.

It's clear that the SSC will easily satisfy blues-rockers or players with more modern heavy rock tastes.

Overall however, we probably prefer the double-cut 33's tone. The SDC is marginally narrower and more compact sounding than its relative; it's less gnarly and more polite, if you like. However, coaxing spirited and bubbling blues-rock tones from the SDC-33 is a breeze and under heavier gain the characterful zing of the MaxConnect bridge shines through and helps deliver a sprightly punch to the note.

So, these 33 Series guitars are the entry point into the 2010 Vox guitar line. Their unique styling, build and features mean they have a lot going for them. As well as being extremely well put together, they deliver an impressive range of sounds that'll suit both modern and retro styles, and they're super comfortable to play, too.

The SSC is generally the more considered of the two in every department with a deeper tone and a more brazen attack for blasting, dare we say Bonamassa-type blues, and heavier rock genres.

In terms of quality and value these Voxes stand up to any of the bigger brands even if, at this point in time, they can't match their six-string heritage and reputation. With guitars as good and original as these, however, who wouldn't want to try something new?