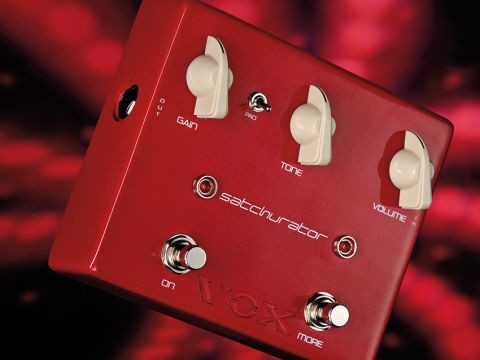 It sounds great; the perfect mix between vintage and ultra-modern distortion stompboxes.

The demand for Joe Satriani signature gear is stronger than ever. We've already got straps, leads, picks, Ibanez guitars, DiMarzio humbuckers, Peavey JSX amps and sunglasses. Okay, maybe not sunglasses, but the arrival of a Satch stompbox is a no-brainer. But when it was announced just over a year ago, the attachment of the Vox name really caused heads to be scratched: why not Peavey, or even Ibanez?

The mysteries behind this union aside, the fact is that the Satchurator is here and it certainly looks the part. The dark metallic red finish, the squat, rectangular chassis, as well as the trio of cream chicken-head knobs, gives the unit a definite vintage vibe although - as we'll discover - the tone is anything but.

In a nutshell, the Satchurator is a dual-function distortion pedal. It boasts minimal controls - hurrah - while keeping your tonal options open, thanks to a very versatile gain pot that works in tandem with the More switch to provide a wealth of varying tones.

Nestling between the gain and tone controls is a micro-switch marked Pad, which, according to the manual, is designed to "maximise dynamics and tone with bright guitars and/or effects such as wah placed before the distortion". Power comes from an easily accessed standard nine-volt battery, or an optional PSU.

Here are a few examples of the Satchurator in action. First, here's the pedal with the gain set to five, the tone to two, and the volume all the way up:

Now for the same settings with the More button engaged:

Finally here's the gain set to four, the tone to four and the volme on five:

The tone is taken from the throaty, all-tube roar of a 120-watt Peavey JSX head through a 4 x 12 cab and we initially felt that the distortion was overly toppy, even after trying to calm it down with the tone control. However, a quick trip back to Surfing With The Alien reminded us of Joe's classic tone and, in fact, the Satchurator gets very close indeed.

One major drawback of using high gain is that there's rarely anywhere to go to boost solos. Adding more drive compresses your tone to mush without actually increasing volume.

The More control offers the ideal volume hike irrespective of where the gain pot is set. It does add a touch more gain, but it pushes the midrange too, thus giving more girth and consequently increased clarity to the tone.

By setting the gain control to lower levels - even at zero, the gain is substantial - you can use the More switch to add diversity to your tone. It gives you a dry tone, a good subtle rhythm tone and a much hotter sound for lead work. It's not a new idea, but we can't remember a stompbox this simple that does it so efficiently.

Criticisms? Well, we find that the Pad switch is so subtle that it's hard to hear any significant difference in the tone with it in or out. We even tried using a Fender Telecaster and a wah into the pedal for the ultimate in bright guitar attack. But still, engaging the Pad switch doesn't seem to affect much either sonically or dynamically.

What is certainly true is that the Satchurator provides a fluid distortion that works well either as a basis for your entire tone or as a tool of embellishment, and that's saying something.

From what Joe has described about the pedal's R&D process and ultimate end result, he wanted responsiveness and dynamics to be at the fore and, on that basis at least, the Satchurator is a real winner.

It's not the most subtle of pedals and we would have liked a more efficient EQ to round off the edges of the tone on occasion. Ultimately though, this is a very musical and expressive distortion pedal that's available at a very competitive price.

The best news is that you don't need to be a fan of Satch to get a great deal from the pedal. But if you are and you want to give your rock or metal tone a kick up the Satchside, this is something sent straight from a blue dream…