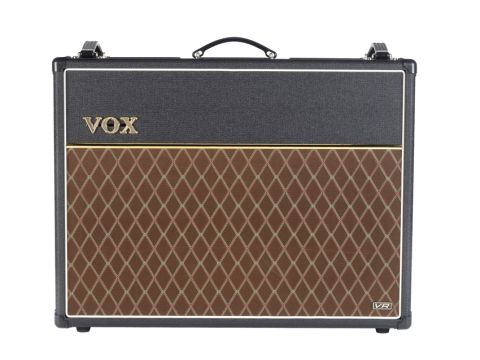 It may not quite be a classic AC30, but the VR is close to the real deal - and at a fraction of the price that's good enough for us.

The Vox AC30 is a legend. It's the sound that The Beatles, Queen and Foo Fighters have in common. Sadly, old models of this iconic amp are also quite prone to blowing up.

Oh, and they're louder than God. They're also heavier than a fridge and cost a lot of money. So it's the world's coolest amp, but not the world's least flawed…

Here comes the Vox AC30VR, then, an affordable version using the company's Valve Reactor hybrid technology. With just one valve, it's set to be more reliable, as well as saving 11kg and over £1,000 compared to Vox's top-end AC30H2.

Question is, can it be as good? Out of the box, it certainly looks the real deal, with only the plastic carry handles giving away its budget price.

Although the AC30VR is lighter than its bigger brother, it's still a beast at 23kg, and at gigs you'll need to enlist the help of your bandmates to cart it from van to stage. The features of this model have been updated with reverb and master volume, while the new dirty channel has a three-band EQ and two modes.

Plugged in, the VR isn't as room-shaking as the old AC30 amps, but it's still decidedly loud. Although not all-valve, it sounds best cranked up, which is when the speakers really shift some air.

The clean channel volume can be used to add grit, giving a valvey, 'just breaking up' fatness to the tone. Brian May (and Rory Gallagher, to whom May says he owes his sound) used a treble booster with his AC30s, and we're pleased that the VR also responds well to pedals.

The dirty channel's first mode is a classic crunch, and the second launches you into a world of distortion. Both modes sound clear and powerful, especially if you keep the volume up to avoid fizziness.

The only disappointment here is that this channel doesn't respond to the guitar's volume pot like a classic AC30 does. Sure, it cleans up, but it sounds slightly harsh.

Luckily, if you use a footswitch, you can get close to that backed-off AC30 tone using the clean channel.

Vox purists might miss the tremolo (found in classic AC30s, absent here), but otherwise the VR is quite complete. Before buying, consider whether you need the extra volume and channel switching. If you don't, you could save a little more with Vox's Night Train.

Valve Reactor technology hasn't slain the all-valve amp, but we are impressed. If only a 2x12 Vox will do and you can't swing an AC30 Custom, you could own one of these without feeling second best.