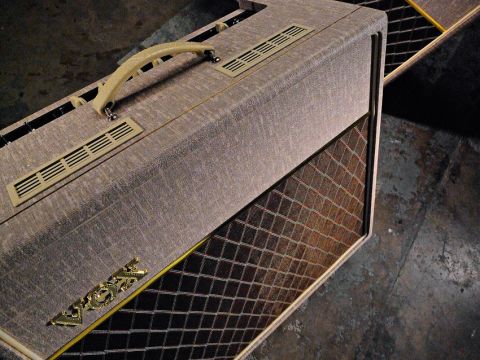 If you can live without reverb and tremolo, these are the best sounding post-sixties AC15s and AC30s yet.

Vox honoured its seminal AC30 in 2007 with a 50th Anniversary Heritage Collection. Like the ground-breaking Custom Classic Series of 2005 these most British of guitar amps were made in China and were well received by players and pundits alike.

Three years hence, the CCs have been updated and redubbed 'Custom', while the Hand Wired versions have also gone through a redesign in order to ensure that the fabled Vox tone is kept intact, yet make it that bit easier to use in modern playing environments.

Outwardly, these new Hand Wireds differ from 2007's model with a modern take on the fawn Rexine vinyl that was first introduced in 1960, complete with diamond lattice grille cloth.

Cabinets are birch ply and the whole thing is finished to a very high standard, with an unmistakable nostalgic vibe - even 'er indoors likes the look of these!

On the inside things have moved on (or should we say back?) from the 2007 hybrid hand-wired/PCB amps. These made-in-Vietnam ACs have a more traditional approach derived from Dick Denney and Derek Underwood's 'Contempo' L-shaped chassis design of 1960. So, we have a meticulous turret board for the electronics, then chassis-mounted pots, transformers and valve bases.

Like kids watching fireworks, there are uncontrollable oohs and ahhs from the amp buffs as you remove the rear panel. There's no EF86-powered channel; Vox has chosen two ECC83 (12AX7) channels, Normal and Top Boost, leaving out the vibrato and reverb options of other AC-series amps.

And here's where the fun starts: the Normal channel has a switchable bright function, while the Top Boost channel offers foot-switchable 'hot' and 'cool' modes for more and less overdrive respectively.

Vox says the hot mode bypasses the tone circuitry for 'richer gain'. The master section employs Vox's familiar tone cut control - things get darker as you turn it clockwise - and a master volume.

Neatly, you can bypass the master if you want maximum headroom from either channel, or alternatively switch it in if you want more driving sounds at lower volumes. Traditionalists will baulk at its very inclusion but, like Matchless's switchable master volume, it's extremely well designed and makes these amps usable in the real world of small gigs.

We should also mention the much higher quality metal mini switches used for the additional functions, compared with the 2007 amp's plastic sliders - one of many improvements in overall quality.

The 'X' designation in the AC30's model name means that power is distributed to Celestion Alnico Blue speakers, which adds considerably to the price. Our 15 has a Greenback.

Most players would agree the Blues are superior in terms of their clarity, harmonic richness and overall feel - they're just 'right' for Vox amps in our opinion - but there are people who prefer the more crunchy overdrive characteristics of Greenbacks. Try both if you can.

Loud, sparkling and with a sweet 'n' sharp edge to driving trebles, experiencing this on the end of a classic guitar is a rite of passage for every electric player.

There's some noticeable background hum, not least in the AC30, which is a non-issue for live use, but more uptight engineers might moan at you if you record with it.

The Normal channel could be a little dark sounding in AC30s of yore, so the addition of the bright switch here is a boon. It shifts the high-end response up much as it does on certain 'Blackface' Fenders, albeit with a hotter sense of purpose and response. Your first position chords can go from sparkling, almost 3D beauty, to a punkier, spiky edge.

Engaging the MV bypass lets you experiment with the available overdrive - the Normal channel goes through on-the-edge fur, up to enough crunch for driving rock rhythms and lighter leads; with a Les Paul's humbuckers it's a thick distortion, albeit with significant sibilant edge that evens out with lower-end colour and thump as you wind the master.

There's much more gain in the Top Boost channel. With the master volume engaged, 'hot' mode, and plenty of tone cut to roll off the edges, you can - don't laugh - approach a kind of modded Marshall-style drive with humbuckers, should you so desire, particularly with the channels linked and maxed. Brian May and then some, you might say.

That's not how most people think of Vox AC amps, of course, so going back to non-master volume and 'cool' modes lightens things to more classic Vox territory.

And what a fabulous noise it is: edge, warmth, presence and the most natural drive - it's a sound you'll associate with early Hank Marvin, rather than the plinky über cleans of his later work. Status Quo heavy'd it for the seventies, before Johnny Marr jangled through the eighties and the whole of Britpop rocked it back up for nineties. Indeed, you know this sound more than you think, but it's the feel that will excite more.

The dynamic range and frequency response of this combination of features - hand-wiring, cathode biasing, no negative feedback, Blue speakers in the 30 - is instantly remarkable to anyone who plugs in.

Which one you go for depends largely on how loud you play - the 30 has significantly more depth, headroom and clout, and you can switch it down to 15 watts, of course. On the flipside, the 15 may be everything you need.

Chances are that if you're into classic-voiced amps and tones, you're looking for a strong core clean-based sound that pushes into overdrive 'naturally' and 'musically'. Those terms are where the problems arise, as we all go about it in different ways: different pickups, strings, a pedal or three, how hard you play…

What Vox has delivered in this genesis of the AC15 and AC30 is enough flexibility to cope with all of the above and give you the response you want. The standard-issue Custom range also does that - and has reverb and tremolo - but there's no doubt these Hand Wireds are a significant sonic step up.

The £1,800-plus price for the AC30HW2X stings a bit, but just try to find another turretboard, hand-wired, 2 x 12 valve combo with Celestion Blues for less. All in, simply lovely.