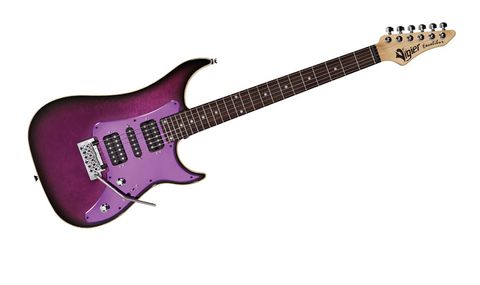 Whether you shred, funk or rock, make sure this eye-popping modern classic doesn't pass you by.

We've reviewed a healthy number of Excalibur models over the years and we've always been struck by the high build quality, the overall vibe and a neck so tactile that playing it could result in a bandmate placing an anonymous call to a tabloid.

What sets this limited edition apart from the standard spec is its aluminium finish. Details on exactly how it's applied are scarce, but it appears that a sheet of aluminium foil is placed on the surface of the maple top and then finished off with a layer of lacquer. Four colours are available - black, green and blue alongside this purple option - and each is matched by a mirrored scratchplate of the same hue.

Up close, you can easily see the sheet's texture - it's not smooth but is almost as if it's been scrunched like a piece of paper before application. It certainly looks striking and we're sure that stage lights will multiply the effect.

Elsewhere, it's business as usual and, as ever with Vigier guitars, we're surprised its wares don't appear in many more exalted pairs of hands. Pickups comprise an HSS configuration of DiMarzios: a Tone Zone in the bridge, a PAF Pro in the neck, and a centrally mounted FS-1 single coil.

The feel of the bolt-on maple neck, reinforced by graphite, is the ideal middle ground between comforting girth and unrestricting skinniness, and the rosewood fingerboard bears 24 stainless steel frets plus a 'Marmite' zero fret.

Vigier points out that, if you can't live with such a feature, it is removable, but we can't say we've ever had much of an issue with zero frets. If it's good enough for Brian May...

The Tone Zone is an Alnico V 'bucker that aims to bridge the tonal gap between high output and a warmer, more dynamic feel, and this it does well. It might be a little too toppy for some, but we enjoyed our time riffing away and found that the tone pot can help to calm the treble performance. There's certainly sufficient bass-end balls to give rock riffs impact.

We'd suggest the single coil may be a tad too gnarly for blues purists - the twang-to-zing ratio isn't really in their favour - but muted clean chops and single notes fly from the guitar with unbridled gusto: it's fun, which is as it should be.

There's not much in the way of warm soup from the PAF Pro, rather an open vintage flavour that's embellished by a more modern urgency that we're sure will appeal to instrumentalists.

With a perfect setup and arguably one of the most efficient refinements of a traditional vibrato system available today, the Excalibur is as playable as it's always been. The modern sonic performance will surely appeal to the current crop of fret-melters, and, with the aluminium finish, Vigier has successfully addressed any guitar's most important feature: what it looks like.