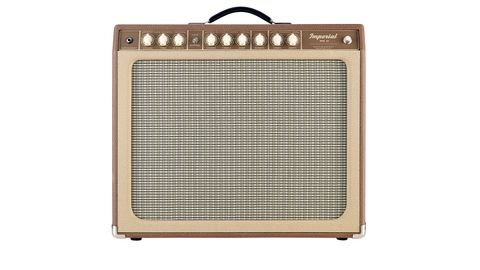 Outwardly old- school, with tones to match, it's the attenuator here that heaps on the versatility. Easier - almost! - to justify its price, too.

Boutique amp brand Tone King is coveted by legions of players the world over - and it's very expensive. Hot off the line after it's unveiling at NAMM, is Tone King's re-released its MkII version signature amp, the Imperial, which is influenced by classic 50s amp sounds and features a built-in attenuator.

On first sight, the Tone King Imperial is compact and portable, with pleasing proportions and beautifully executed joinery.

The brown and cream vinyl and matching control panel graphics are strongly evocative of 50s America, with extreme attention to detail.

Everything from the perfectly applied cocoa vinyl to the concealed chassis bolts has been carefully thought through and executed flawlessly, apart from the carry handle, which we reckon should be brown rather than black. But that's purely a cosmetic observation...

Internally, the Imperial is mostly PCB based, with one large board carrying most components including the valve bases, and a smaller board behind the rear panel holding the attenuator electronics. The front panel pots are all hand wired, with other cabling routed and suspended in 'P' clips to ensure it stays put.

The Imperial is a non-master volume design: the lead channel has controls for volume, tone and mid bite; the rhythm channel has volume, bass and treble controls, with speed and depth for the term effect and a reverb level knob.

Its secret weapon is on the rear panel, in the shape of a built-in Ironman II attenuator, which can switch down the amp's output in five steps.

This can be set to operate on both channels or just the lead channel, so you can dial in the perfect blend of volume and distortion for lead and flip to the full headroom of the clean channel. There's also a high frequency compensation switch to balance out the treble at lower volumes.

Overall, it seems built to handle any amount of use and deliver great tone, night after night.

The amp has an exceptionally low noise floor, with no audible hum or hiss. The Imperial is influenced by classic Fender sounds, with a sparkling rhythm channel that boasts a full bass out of all proportion to the cab, combined with balanced mids and a wonderful, chiming treble.

The multi-layered, highly touch-sensitive overdrive is a product of preamp and power amp distortion, and the attenuator makes balancing volume and drive intuitive and easy.

It's only rated at 20 watts, but the Imperial should handle smaller gigs with ease. It also produces excellent tremolo and great reverb, staying true to its 50s roots with an almost chamber-like decay.

The Tone King's lounge-friendly looks and attenuator make it perfect for the home, as well as live and studio work.

The ultra-low noise floor and frequency-compensated attenuator record superbly. And the illusion of playing through a maxed-out amp at conversation volume is both inspiring and very useable.

Predictably, it's expensive, but the Imperial's flexibility, looks and build quality make it easier to justify.