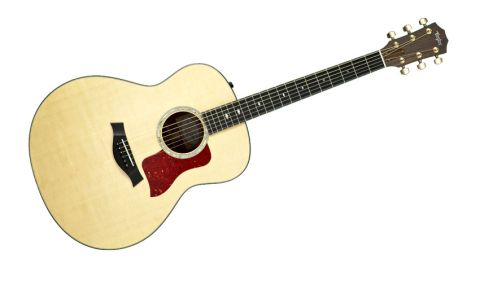 Powerful and with a real bass guitar-like low-end, the Grand Orchestra offers a new voice. Where will it take you?

It's fair to say that there's a something of a trend for vintage-style instruments in the acoustic world right now. Full marks, then, to Taylor for doing - as ever - its own thing and coming up with a new design. Okay, it may have started as a revoicing of its classic jumbo shape, but a quick strum on the 518e reveals that this is no Taylor we've ever heard before. But we're getting ahead of ourselves...

Technically, the guitar it replaces, the Taylor jumbo (JM), was bigger still - 432mm (17 inches) wide and 533mm (21 inches) long, but with the same GS depth of 117.5mm. The GO appears more Taylor- like in style, too, in comparison with the previous JM: its upper and lower bouts are slightly trimmer with a less waspish waist. It appears like a slighter larger version of the Bob Taylor designed GS, introduced in 2006. The new GO, however, was conceived by Taylor's new master builder, Andy Powers.

The model's third digit, in this case '8', indicates the GO body style. Taylor's standard 500 series marries solid tropical mahogany back and sides with either a solid Engelmann spruce or red cedar top.

Here, though, the top is Sitka spruce and almost 3D-like in its grain structure - cleanly bound with a mostly deep-brown faux tortoiseshell. Mahogany isn't known for its 'figure', rather its mid-brown colouration. But the back and sides of this beast are beautiful, with black grain flecks and an almost burnt orange colouration.

Mind you, the abalone centre of the rosette seems a little out of place here compared with the engraved pearloid 'deco diamond' fingerboard inlays and simple white stripe between the tortie binding and dark ebony 'board.

Likewise, the satin-finished rosewood headstock facing seems a little at odds on this model, contrasted by the unfinished rosewood truss rod cover. Even the 'Italian acrylic' headstock inlay appears a little out of place, and isn't the brighter tortie pickguard a little too, well, bright? Subjective, yes.

Cosmetics aside, it's the voicing of the GO that's the big departure from previous Taylor designs. "On a basic level, the bracing is quite similar to our other guitars," says Andy Powers. "It's still an X-braced guitar, but on a deeper level it's substantially different, because the bracing is more like a combination of what a modern maker might call a 'parabolic' bracing and a scallop.

"Essentially, instead of building in little stiff spots with those peaks on a scalloped bracing, all the curves are more like a suspension bridge, or a leaf spring design, where these higher tops move as one unit - a really low-mass design. So, what I've ended up with is a top that's set in motion very easily."

One of the foundations of the Taylor empire is very inviting playability. Here, the 14-fret neck, joined to the body by the adjustable NT neck system, has a subtle, soft 'V' profile in the lower positions. This smooths out to a more rounded 'C' section (21.5mm/0.85 inches deep at the 1st fret, 22.5mm/0.89 inches at the 10th) as you move up towards the elegant, sharp-nosed heel with, as usual, that additional treble side-placed strap button.

The 'e' suffix denotes that the guitar features Taylor's Expression System (ES). Its discreet forward shoulder-placed and centre-notched bass, treble and volume controls give a surprisingly wide array of colours. Hidden from view are the two sensors - one is placed to the bass side of the bridge, and you'll find the other buried within the neck joint. Mounted on the preamp's circuit board is a small slide switch that allows you to turn the body sensor on or off.

A quick strum on the 518e confirms that it really does sound huge - it's like switching from a 1x12 combo to a half-stack, where the 4x12 adds a cushion of low-end. The low-end on bigger-bodied guitars can be overcooked, leaving the mids and highs sounding a little soft. Here, the balance - often a Taylor strong point - is frankly superb.

You wouldn't imagine a big guitar to be that fingerstyle friendly, but this guitar excels, especially if you use a lot of basslines in your style. Played with the flesh, rather than nail of your thumb, the low E and A sound really bass guitar-like, and, by design, you don't have to dig in too much to get your sound out. There's a much more 'small body' response in that regard, and the dynamic range is very impressive.

Pulling out a couple of dreadnoughts (a Martin and an old Tacoma) to compare, it's rare that a dread sounds deficient in the low-end, but they really do. The Martin, especially, provides that typical upper-mid thrust, but the GO just seems more tonally balanced. We can't stress this enough. Listening to a smaller- cutaway PRS Angelus, it matched the GO for low-end, but to our ears the lows sound a little over-egged.

A recording test - using the ES output - definitely narrows the game a little, especially with other instruments at play in the track, and through a variety of amps the relative smoothness of the ES really suits this guitar. Likewise, the two-band EQ can tighten the low-end - which certainly might be necessary live - or tame or enhance the highs, depending on your taste.

This Grand Orchestra leaves us with a quandary: who, exactly, is it designed for? As a big, bold strummer, it's an easy fit for the soloist, less so for ensemble use (especially if you have a bassist), because it really does take up so much sonic space.

For the fingerstyle player or the hybrid picker, this model is surprisingly rewarding, especially if you have the ability to voice bassline, chords and melody and/or use dropped tunings. It might be an unusual statement, but we could hear these in the hands of a jazzer, or even a bossa nova stylist who's more accustomed to nylon strings.

Conversely, the GO excels as a huge-sounding 'rock' acoustic: big open-string chords just sound fantastic, and there's a good tonal body for lead lines and solos. Can you see our dilemma?

But our overriding thought is about the tonal balance. Plenty of big guitars give you low-end, but fewer are quite as well balanced as the GO. It has a superb balance, and for such a big guitar it's surprisingly dynamic, powerful and responsive. You really don't have to dig in hard to get the sound out. Put another way, if big guitars aren't your thing, it's time to change your opinion. It's not quite an orchestra, but it's damn close.