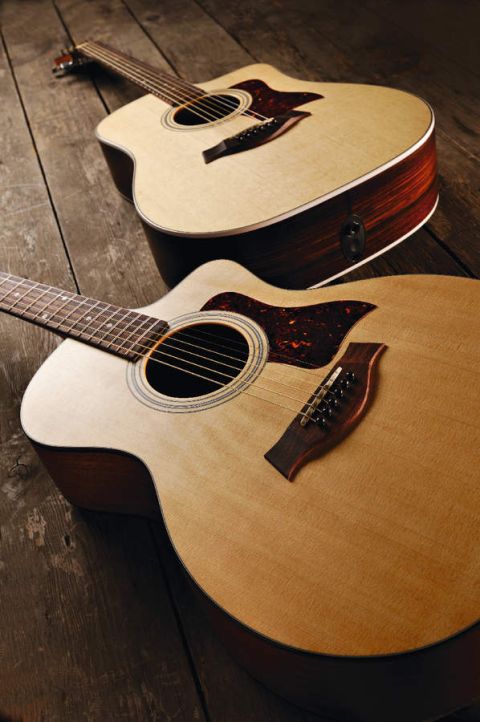 It delivers the goods.

The Expression System controls are discreet.

There has always been a whiff of elitism about Taylor Guitars. When Bob Taylor launched the company out of Lemon Grove, California in 1974, the in-house philosophy was quality without compromise.

Not much changed over the next quarter-of-a-century with Taylor pushing the envelope for well-heeled punters, but proving slower to cater for their mid-price counterparts.

Since then, this lower-priced range expansion has been best described as cautious, with the 200 models initially coming in a natural acoustic format, then introducing electronics, and now finally - with the new 210ce - adding a Venetian cutaway to the dreadnought and grand auditorium body formats.

For the working musician juggling aspiration and budget, this models is attractive, but we wanted to dig beneath the price and the logo on the headstock…

Billed as the series that "redefines what a mid-price guitar can be", Taylor's 200 range seeks to bridge the gap between the 100 Series and the main USA product line.

In the case of the 210ce dreadnought this means the price tag is £849 and the guitar comes with a case.

Alongside white binding that traces the outline of the dreadnought body, the most tangible departure is that the back and sides of the 210ce are made of Indian rosewood.

Arguably, for most guitarists, it's a more interesting tonal prospect than sapele, but it's a slight disappointment to discover that, despite the hike in price, we're still in the laminate zone.

It's very hard to find fault with the 210ce. Taylor makes a great dreadnought and its subtle spin on Martin's square-shouldered format pays dividends here, with the depth of the body accentuating the attractive colouration of the rosewood and the expanse of spruce working beautifully with the unfussy
trimmings.

The finish is uniformly tidy - Taylor is famed for the consistency of its production - and certainly no more than we'd expect for £849.

Cheaper dreadnoughts can feel like hard work; this one almost plays itself.

This is a comfortable player, with a not-too-deep feel to the profile that encourages flatpicking and fingers, and a generous cutaway that lets you fret chord fragments - not just single notes - at the top end. A great all-rounder.

Taylor dreadnoughts tend to have a shallower rim depth than some of the 125mm bruisers you'll find out there, but the 210ce has no problem with unamplified grunt and leaves most of its rivals for dust in the tone stakes.

We get tight top end shimmer bolstered by authoritative warmth in the lows, coupled with bags of sustain and commanding dynamics that imply this model could face up to most styles.

It'd be short-sighted to categorically declare rosewood 'better' than sapele, but for guitarists who want their snap 'n' pop lead lines underpinned by the warmest of thumbed low notes, the combination of timbers offered by the 210ce means it deserves serious investigation.

Even when trying to build guitars for the less wealthy among us, it seems Taylor can't help but knock out instruments of the highest quality.

At £849, there's no doubt the 210ce is still a serious investment, but you're rewarded with some of the sweetest tones and best playability in this price bracket, along with - let's be honest - the sheer kudos of owning a pukka Taylor.